Having read a little about the special Bullseye guns people have used over the years, have any been as specialized as this one Doug Koenig had built? 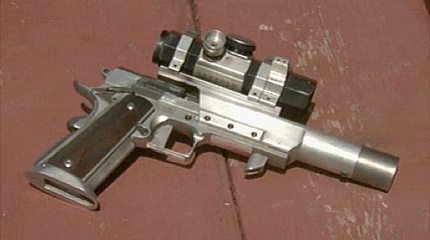 
Do people competing in Bullseye have guns built specifically for their body?

That's not a BE gun. That is for Bianchi Cup action pistol.

True, but it indicates that customization can make top end performance somewhat better.  Take a look at Jerry Keefer’s posts on his customized pistols for his lady shooter.  Do the custom features make her performance better?  Probably, but much of this is related to fitting the gun to the individual.  Most of us make do with what we have,  real high-end performers make the gun fit them.

Yea nobody uses compensators in bullseye, but thats a nice pistol for its intended use but not for bullseye. As for custom touches, well the record set by Herschel Anderson in 1974 still stands and it was a armorer prepped service 1911 with open sights. So it boils down imo to there is no substitute for natural or learned talent but as a crippled person is able to walk with crutches so may a not so talented shooter( that includes a lot of us, lol) benefit from custom features like grips, triggers,optics or other items.

As previously stated that's not a bullseye gun, that protrusion out the bottom is for hooking/pushing on barriers for certain shots.

Many even beginning bullseye shooters and I'd guess almost all Master/High Master have their guns built or modified to their preferences.

Since bullseye pistol shooting is a one-handed game, I always considered weight a factor. Looks like these pistols, being fired mostly two-handed, they don't worry about excess weight and may even consider a lot of weight an advantage (less apparent recoil).

It really depends on the events, there are quite a few guns having the slides lightened for competition too.  A lighter slide cycles faster.  The one pictured is not a ported barrel but the holes along with the tri-cut are just to reduce weight. 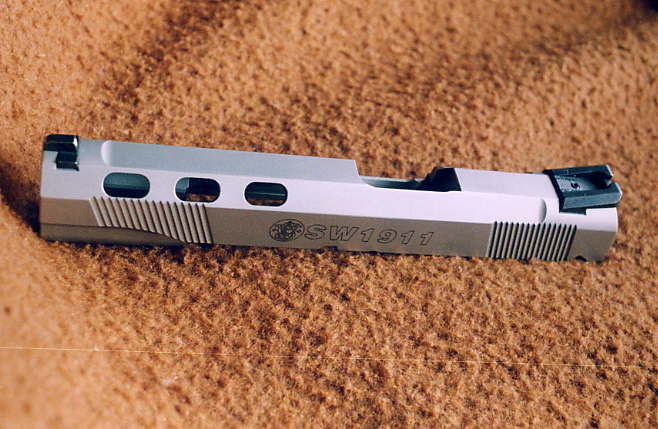 Of course it's definitely much more the indian and not the arrow, but I would think the practical hot set up for bullseye would be a 1911 in .45acp with a long/wide extended dust cover, compensator with a bull barrel style lock up, lightened slide, and a frame-mounted red dot.  My theory being, the long/wide extended dust cover would provide added non-reciprocating mass for recoil reduction.  While the compensator wouldn't be as effective as it would be for hotrodded .38super/9major loads found found in USPSA due the lack of gas volume in .45acp bullseye loads, it would still have a noticeable effect (I remember running a comped .45acp back in the old days of USPSA), which would help in timed and rapid.  I would think having a bull barrel lock up instead of a bushing would eliminate a tolerance (bushing = slide-to-bushing + bushing-to-barrel. bull barrel = just slide-to-barrel.), resulting in greater potential accuracy.  The added mass of the cone would also soften recoil.  The lightened slide would reduce reciprocating mass, allowing the gun to cycle faster and shoot flatter; all of which would help in rapid fire.  The frame-mounted dot would make it easier to tune the gun for reliability and would probably improve reliability of dots.

I would think the impractical hot set up would be a 1911 in .45acp, but converted to a fixed barrel set up, using either a roller-delayed blowback system (like the Korth PRS), or a gas-delayed blowback system (I think this is what Ed Masaki's Dragon Gun uses), with a compensator and frame-mounted red dot.  A fixed barrel means a lot fewer tolerances to worry about, and should offer greater potential mechanical accuracy than the tilting barrel design found in the stock 1911.

Of course some will say, if either was truly the hot setup, the military teams would be using it.  But I think as shooting disciplines go, bullseye is much more tradition-bound than other disciplines like USPSA, and that tends to slow down the incorporation of more outside-the-box ideas.

Get an estimate for the build and let us know.

Yes, I have a Clark Heavy Slide. My point was that in one-handed shooting there is a point of diminishing returns with weight. With some of these tricked out IPSC, Bianchi Cup, etc. pistols, there may not be anything as considered excess weight.

Yes, I have a Clark Heavy Slide. My point was that in one-handed shooting there is a point of diminishing returns with weight. With some of these tricked out IPSC, Bianchi Cup, etc. pistols, there may not be anything as considered excess weight.

While most Bianchi Cup guns tend to be relatively heavy because of the shroud, mover base, etc, I would guess most STI/SVI-based IPSC/USPSA open guns with their composite grip frames, lightened slides, and C-More or other tubeless dots would tend to be lighter than you'd think, and maybe even lighter than a lot of bullseye wadguns. (At least when empty; a 170mm big stick with 26+ rounds of 9mm or .38 super can add a lot of weight.)

As you state there are a lot of STI/SVI comped guns which will shoot 1.5" or less at 50 yds with major loads. There are few of the old Clark Pin Guns in .45 ACP which are quite accurate. I do know that a compensator reduces muzzle flip by a noticeable amount even with .38 cal bullets travelling in the low to 800 fps range.

Brian Enos was the first to show up at Bianchi with a scope, and he won with it. Ever since a scoped gun has won every overall Bianchi Cup. There is no doubt in my mind that a properly comped 9mm or .38 Super would be beneficial in BE CF. I would think that the same would hold true for .45. Why wouldn't it? The comp, if done properly takes nothing away from accuracy, yet reduces muzzle flip and recoil. It does add significant noise, and will require different spring set up to make it run. I am confident a slide mounted scope on a comped gun would not work, so well, but the frame mounted would work fine. So that good Nosler or Zero 185 JHP running in the upper 800's would be much softer to shoot. Weight can be dealt with, with some of the newer technology of modular concepts. Comp could be aluminum or titanium. Alloy or plastic lower with steel rails or rail inserts are an example means to reduce weight. I would prefer taking the weight out of the moving parts if possible.

It may even come down to bullet technology. Perhaps a not yet invented 145 - 150 gr metallic or polymer coated .451 projectile running close to 1,000 fps with a comped gun will be the ticket some day. Some of the new 75 -100 gr self defense projectiles are very accurate in 9mm and .38 spls. Maybe take one of the old stubby 45 WC bullets and make it a hollow point to reduce weight may be an option. Have to think out of the box.

Shooters are slow to change. They look at what the best shooters have been using/doing and they mimic it. Some one needs to break out of the pac. Who will it be?

The kicker is: same gun, same ammunition. 275 was a winning score because that was good enough to win. Once it took better than that to win, everybody's scores went up.

Equipment is not the limiting factor in national-level bullseye scores.

That sounds like Harry Reeves. But same applies in all sports. Roger Bannister and his 4 minute mile and on and on in sports.

A good equipment example is .38 Super. Originated in the 30s and used primarily in law enforcement. Powerful, but not accurate enough for competition. The action pistol crowd, liked the potential for higher round count, and meeting their power factor requirements starting considering it. Accuracy still a problem.

My recall it was Irving Stone at Bar Sto would made the first barrels (late 70s) where it headspaced off the neck instead of the rim. Bam, an incredible accuracy enhancement. Now all modern .38 Super are chambered to heads pace off the neck and no longer the rim. FYI .38 Super is a semi-rimmed cartridge. .38 Super Comp is the same chamber dimension, just the brass is made rimless. Someone, in the 70s thought outside the box and 40-50 year old cartridge was reborn.

"Of course, it's definitely much more the Indian and not the arrow"--?

Not to be PC, but I would read this book before throwing around language like that.:-)
https://bookspublicdomain.com/Main/Geronimos-Story-of-His-Life-Ed-by-S-M-Barrett.htm

Goyathlay: One Who Yawns, AKA Geronimo