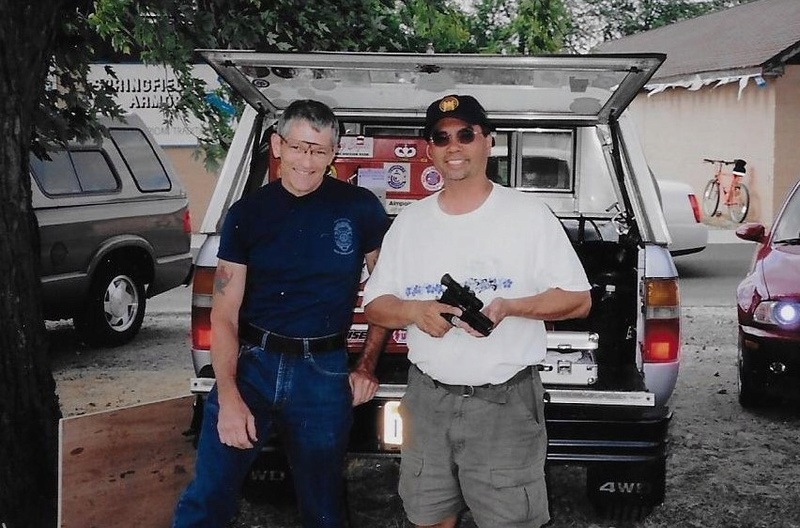 At first, I was hesitant to post any pictures, but this shot of Jerry Keefer speaks volumes.

Jerry Keefer was one of the few individuals who made my first Camp Perry trip memorable.  This custom Jerry Keefer 1911 pistol was given to the highest scoring new Camp Perry shooter.  The next year he gave away a S&W model 14-3 revolver during a drawing at the Bullseye picnic.  Each year Jerry came to Camp Perry to support his shooters who bought his pistols, putting aside his enormous duties of maintaining hundreds of law enforcement firearms.  One year, I came across a crowd by a picnic table and found Jerry taking apart 1911's for his shooters, cleaning each pistol and applying his special lubing technique.  All his tools and cleaning equipment were loaded into his truck so he was always prepared to lend a helping hand.

Although an accomplished shooter, he rarely talked about it and he was always helping others.  Throughout the years Jerry would always answer my questions without hesitation as he did through the Bullseye-List and the Forum.   I was privileged to have known Jerry, and part of Jerry will always be in my 1911 as he helped designed the sear to give it the special roll.

Great pic, it does speak volumes, & many thanks for posting.

xmastershooter:
I hope that you don't mind, but I copied and
pasted a link to this thread over on 1911Forum.