My Hammerli 208s is getting brass stuck between the slide, and frame, and LarrysGuns red-dot scope mount.  Happens with all 3 magazines I have, about 1 or 2 times a magazine.

Before I got the scope mount, I never had stuck cases.

I've noticed that a piece of brass isn't held tight up against the breach face.  Is the extractor possibly worn down?  Should I buy a replacement from Larry?  I see he has a "new style", but it has no description so I'm not sure why the style changed, did he change it, or Hammerli, what problem is it solving etc.

Here is a video of the brass movement: 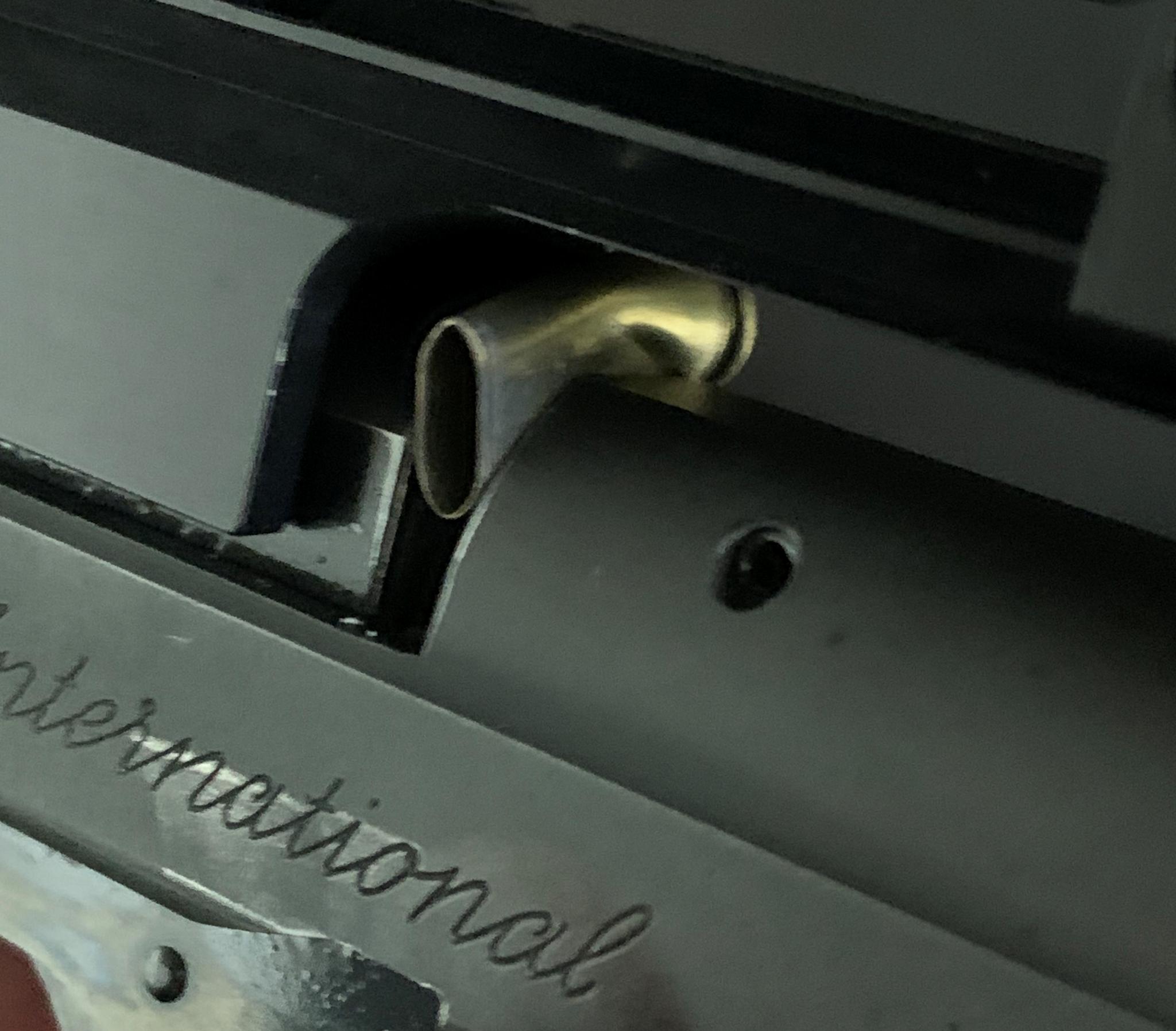 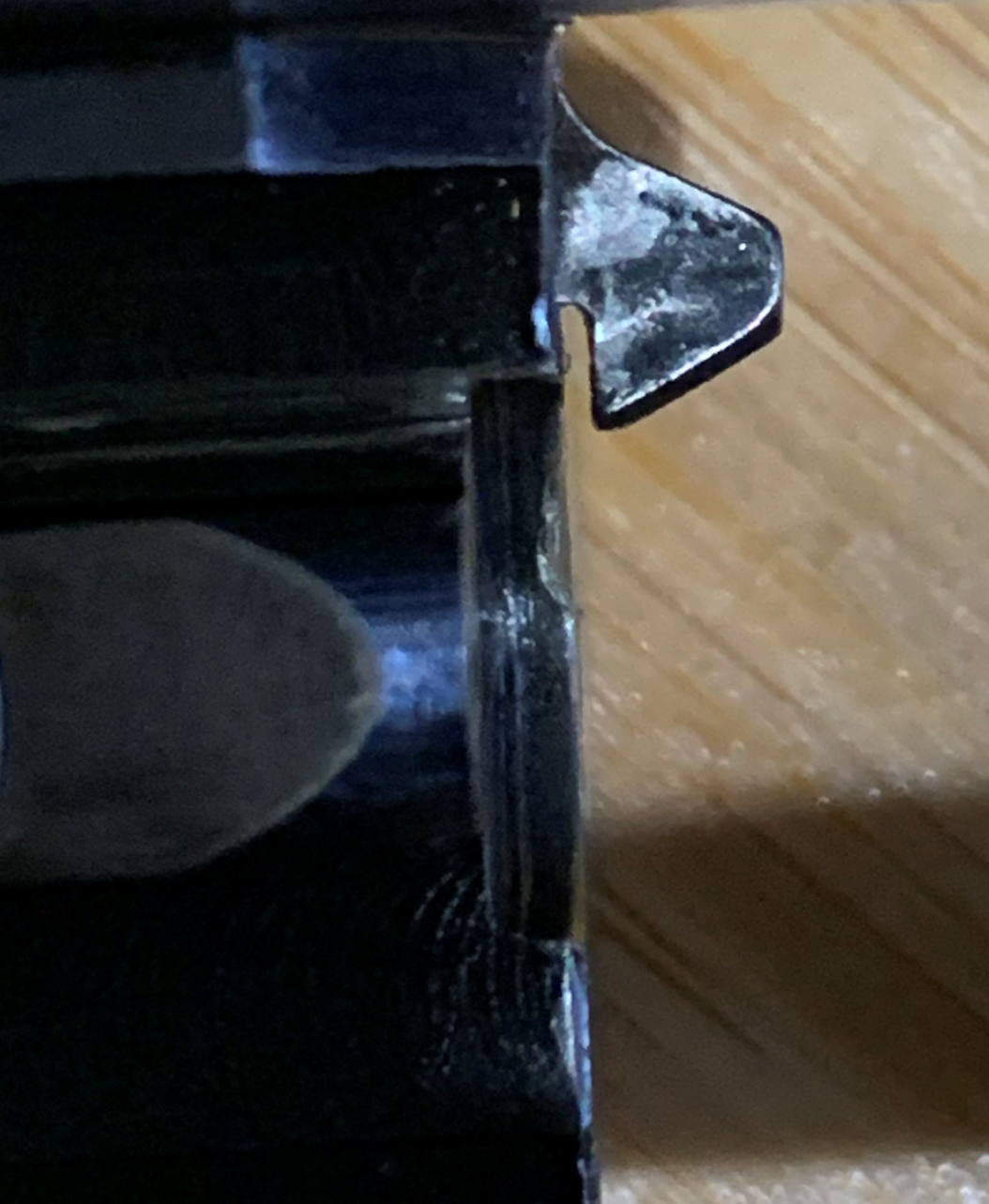 Ok, the only thing that changed was you adding the scope mount, right?

And you want to start messing with a gun that was working before?

Take the scope mount off, see if you still have a problem.  If so, then trouble shoot.

But you will probably find out this is an issue with the mount and the direction that cases take on ejection.  Happened the very first time I put a scope mount on my Hammerli.  My fastest solution was to just cut off the offending extension of the scope mount, even with the back of the barrel (which I did for all my Hammerlis with scope mounts) and mounted my scope.  (I detest modifying a working gun unless absolutely necessary.)  I simply used a wide mount on the front tube and let the back hang over the slide to get the balance I wanted.  Most scopes have no issues at all mounted this way on a .22.

CR10X wrote:... cut off the offending extension of the scope mount ...

When you cut the mount (after removing it from the gun first), bare metal will be exposed. Just apply some bare metal primer followed by flat black paint such as Rust-Oleum.

Cutting the scope mount may help (or even cure) the issue and isn't a bad idea, since it does open up the area.  But, the real problem is that your headspace has worn.  Look at the bottom center of the provided picture and compare it to the top center to the left of the extractor in the current picture orientation.  The headspace cut at the top is clean and almost 90 degrees perpendicular to the main headspace flat.  Now notice how the bottom cut is nowhere near 90 degrees.  It slopes away from the main flat.  If you look really close, you can see a tiny bit of metal has formed a little lip.  Because this area has opened up with a bit of a slant, the case can't be held firmly.  The extractor pressure pushes it right past that edge as soon as the case clears the chamber.  This means the case gets loose before reaching the ejector.  Without the scope mount covering the port, the case can get out of the way when the slide closes on the next round, no matter what direction it travels, but restricting it with the covering means it has to travel out the side to make it free.

Thanks for the advice everybody.  I feel like the scope mount variable is a symptom of the problem.  I think Ed is on the right track.

I'm wondering though, you think it's more likely that the headspace has worn, as opposed to the extractor being worn?

It seems like the extractor isn't even close to holding the case in place.  You can see the giant gap in the picture below.  Does anybody have pictures like mine, with a slide that is new/good condition?  How about the extractor? 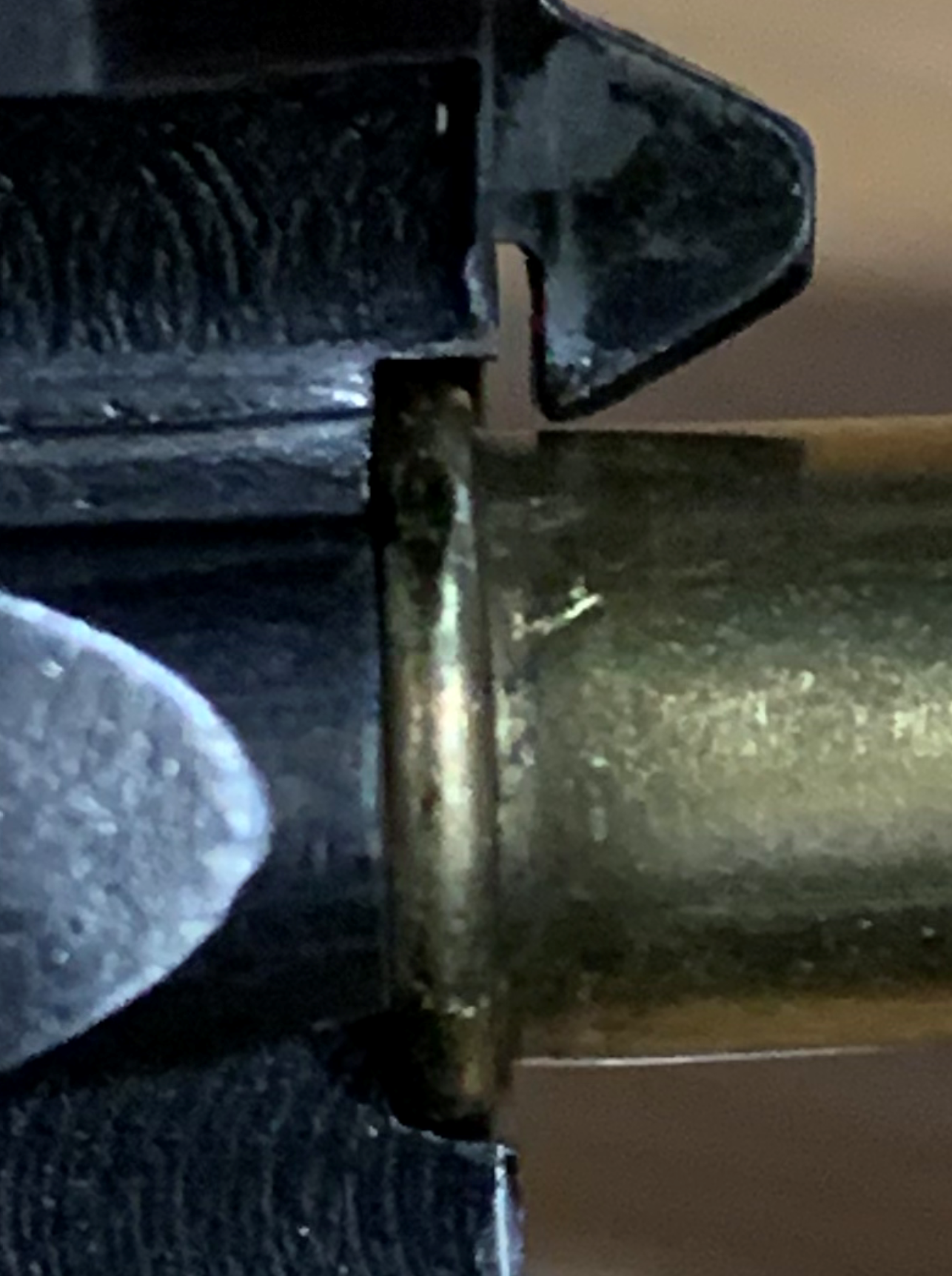 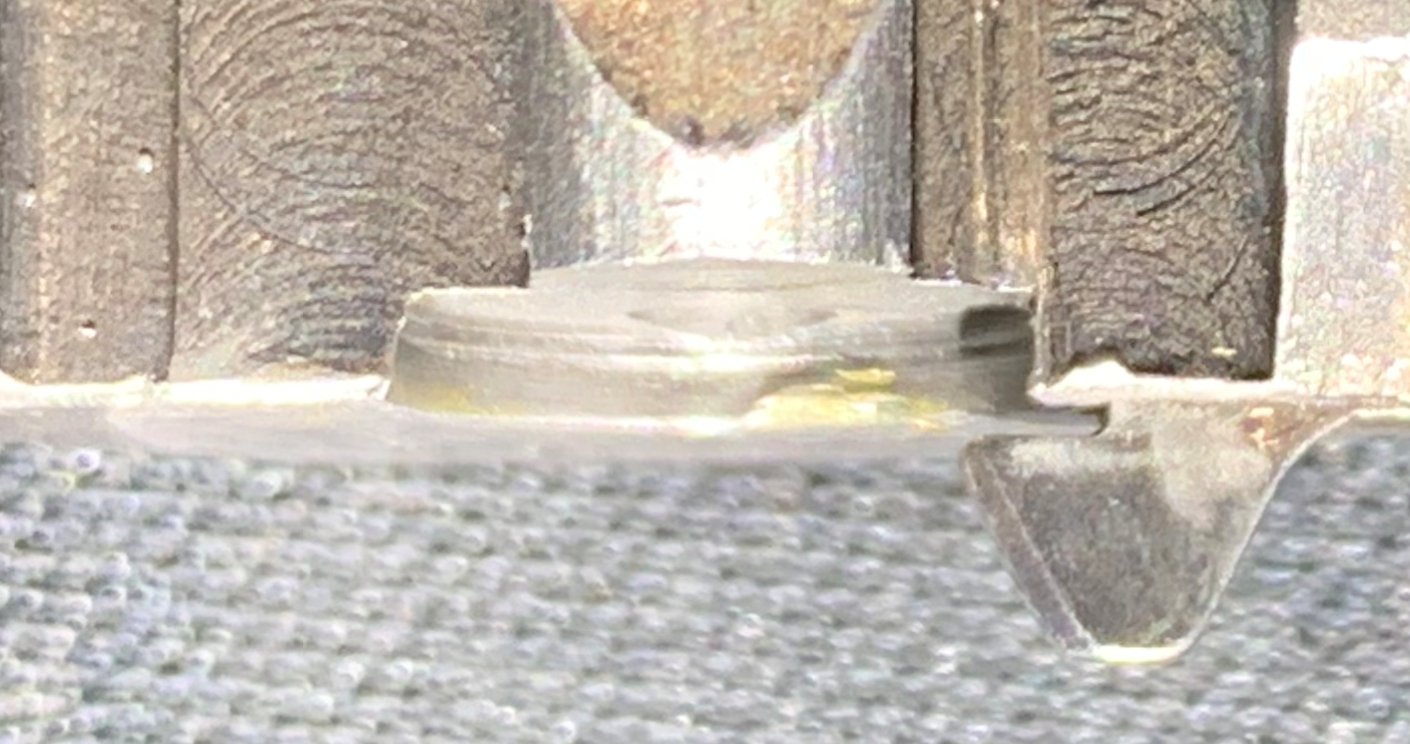 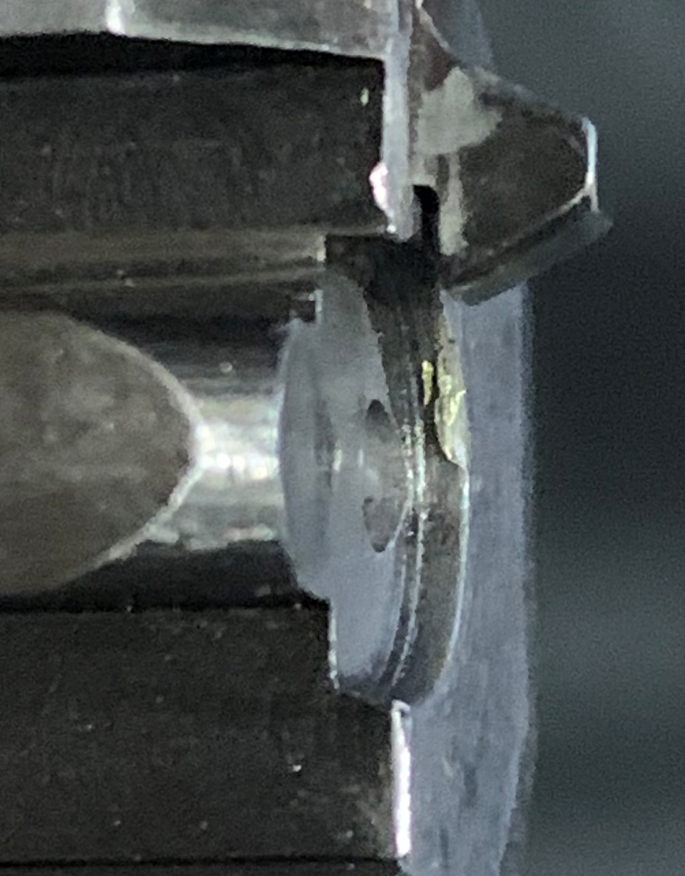 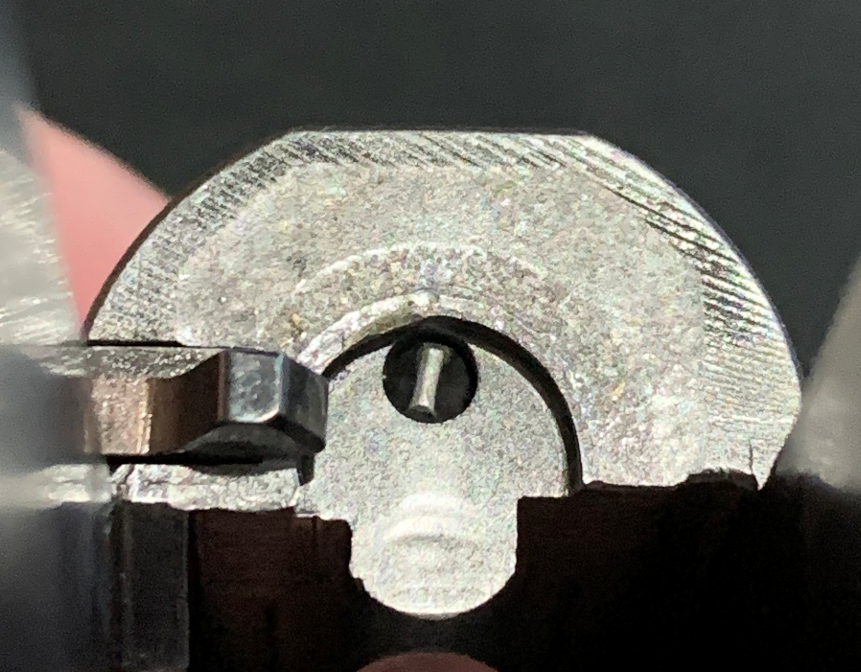 Great pictures!  Yes, your extractor tip is rounded and worn, as well.  In the picture, it doesn't make it to the case wall, but it looks like the case isn't up against the side of the headspace under the extractor, favoring the space across from it that is now sloped away.   If you look at your last picture and consider that the headspace is actually more than 180 degrees of a circle, on the right side the lower area should actually be closing in, or at least straight down.  In fact, my new slide was closed in slightly when I acquired it years ago.

The distance from the rim to the extractor should be a little bit smaller, but it shouldn't be really close.  That may actually indicate that the portion of the slide where the extractor is held in place might be worn as well.

You also have a"ding" to the left of the firing pin hole that will push the case downward, adding to the trouble.  That should be either ironed back or removed.

I don't have a Hammerli, but I've had extractor problems in other 22s and yours doesn't move according to your video. As you see in other image the tip won't even touch the side of the case, it should be on the rim at junction of the case side. I'd first take out the extractor and see if the spring is weak or broken (replace it if needed) and clean up that groove good and see if the extractor will move closer to the case. The extractor also could be worn and out of spec like you say. The main job of blowback pistol extractor is to hold the case against the slide as it is going back so the ejector can force it away. Looking at those pictures, Ed is right on in my opinion, you could have a headspace issue because the case has to come forward for extractor to get close to the rim. You should be able to take your slide off and place a cartridge under the extractor and shake it some and it should hold it on the slide.
Stan

The case is pinned between the wall and the extractor.  So the case can't move any left/right.
There is for sure a bit of metal bending over that should go.  It can hang up the case.

The extractor cannot move closer to the case, as there doesn't seem to be anything in the way.  The extractor is flush up against the slide.

Since the extractor doesn't contact the case, it doesn't hold it in place.  A case easily falls out. 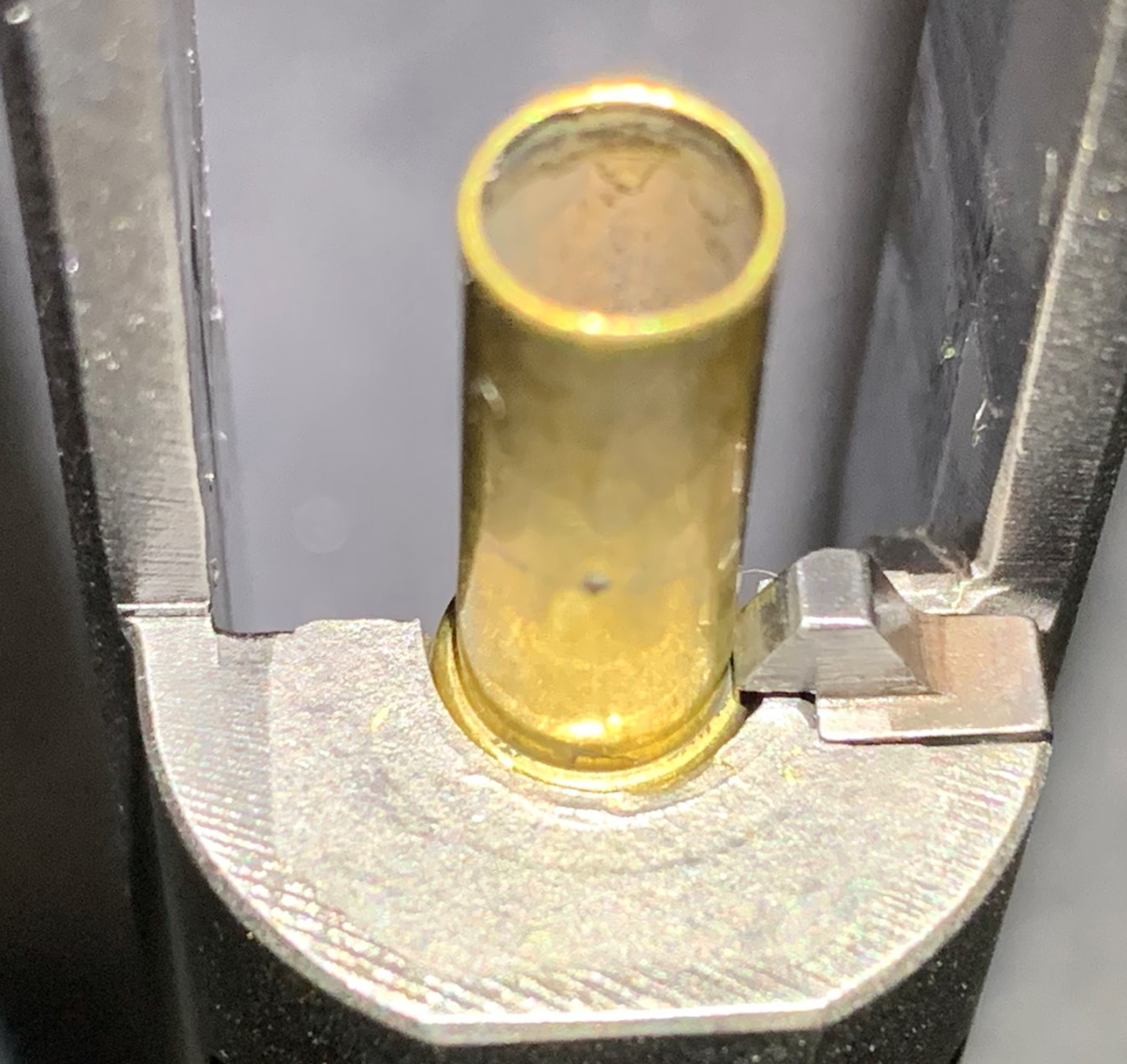 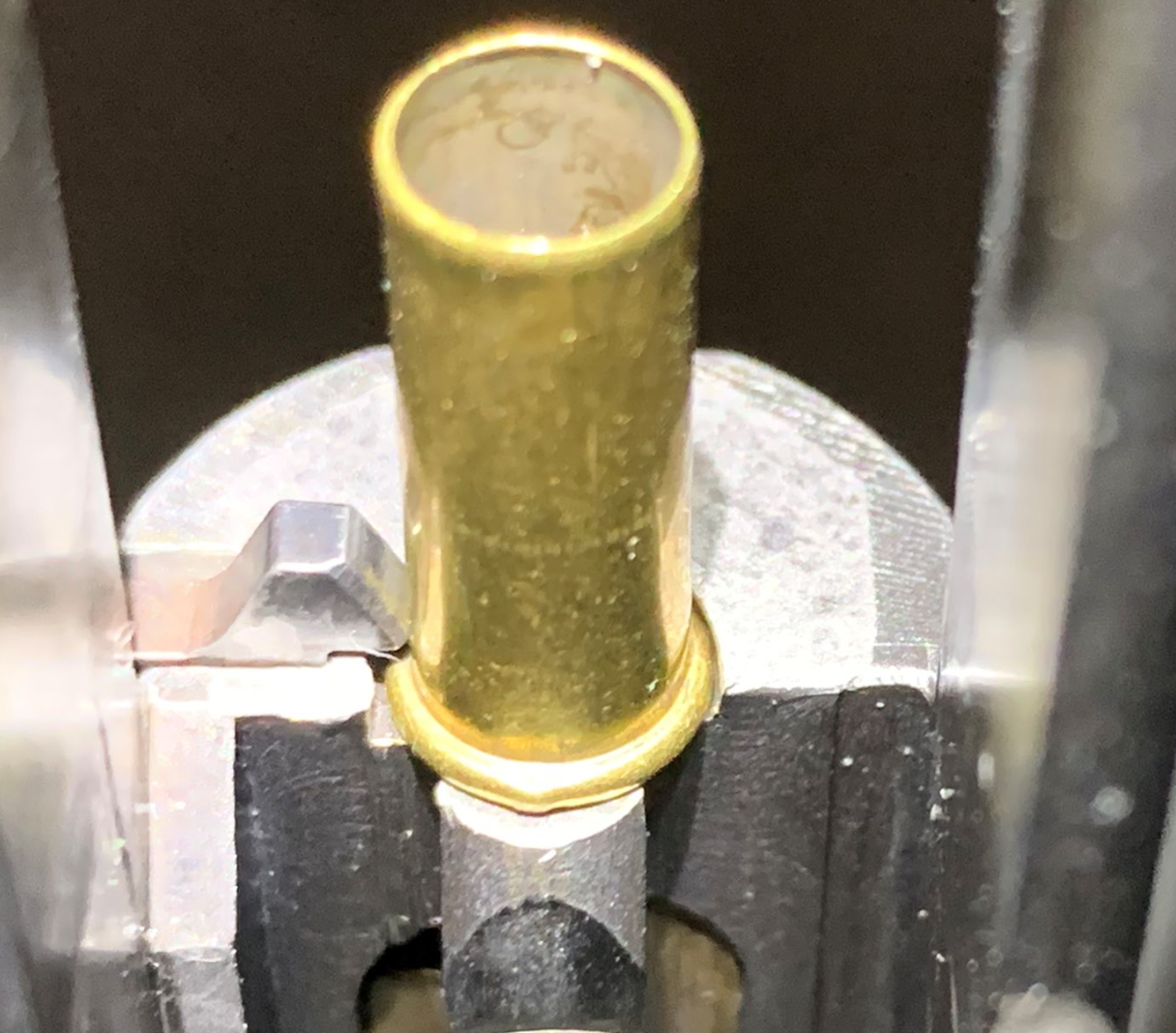 BTW, Larry doesn't have any more of the older style extractor. only the newer long ones. Judith Billharz used to have some. There's also a guy on gunbroker that has them for the quite reasonable price of $178!

What's the difference between the old and new extractors?

Use a chisel like tool to remve that tit at the top of the slide. Go from the bottom, with the tool flat against the breechface and push up while rotating around the top edge. Moderate pressure is all that's needed.

Have same issues with mine and the tit affected extraction

I too am working on sorting out a 208 International that I recently acquired from a clubmate's estate. My firing pin looks very different from yours. It is chiseled on three angles, not just two. This spare is identical to the one presently installed in the pistol.

I also purchased Larry's scope mount (from Red Feather), but after experiencing some jams, I reprofiled the underside of the scope mount as follows:

I am still sorting this out, but I wanted to share these pictures to illustrate part differences and my first attempt to remedy the scope mount. A clubmate (Pat K.) solved this issue by whacking the tail off of his and switching to a smaller dot sight. I am hoping that won't be necessary, but that may be a last resort.