In seriously thinning my herd I have an AutoChamp Mk-IV that I was using for .38, but the .38 pistol is sold. So ..

I am wondering what to do about selling this press.  I see a recent AutoChamp sale on eBay at about $1400, but found other older sales more like $400.  IMO having owned a Dillon SDB and  Star, the AutoChamp wins hands down, but that doesn't matter if no one knows what it is.  In researching I was amazed that CH4D still supports the press with powder bushings and a list of about 120 parts at very reasonable prices.

Thoughts on this press?  Anyone familiar with them and, better, with the current market?

I started reloading on one of these close to 30 years ago.  I bought mine used from a retiring shooter and loaded with it for 5-6 years before I bought a Dillon 650.  For its time, I thought it was a well built piece with a lot of unique features but it seemed to be fussy at times. The shell advance mechanism worked best only when all positions had a shell in them for example.  It also would drop powder without a shell present if I remember correctly. Changing calibers is a bit time consuming because the dies all come out individually and it is a pistol only press.  Owning this press did inspire me to look for a press that had some of the deluxe features however.  I liked the auto advance feature and mine had a 6 position shell feeder so I could load up 100 cases at a time, which I also liked.  A couple of other features I decided I wanted because the Auto Champ didn’t have them were the 5th station for a powder check, powder drop only when a shell is present, and rifle capability.  I can’t comment on the presses you compared it to but I feel the 650 is a better press but I would expect that because it is a much newer design so it should be more advanced.
As to value, in normal times, used presses usually bring less than a new one would.  That ratio is further widened when it comes to an older, outdated model such as this one simply because most people are more familiar with newer models.  I haven’t sold anything in a couple of months but this last year has been crazy for gun,shooting,reloading equipment.  The last thing I sold was a super simple Lee single stage shotgun press that last retailed for something like $15.00.  I sold it on eBay for over $100.00 with multiple bids.  My recommendation would be to put it up for auction and see where it goes.
Good luck.
John

I own three of them and still use 'em.  At one point, I tried a Dillion 550 but preferred the CH and got rid of the 550.  I replaced the factory CH powder measure and replaced it with Lee Pro Auto Disks so it doesn't drop powder unless there is a case.  I use the CH for both 45 and 38 and really don't want anything else.  I've reloaded well in excess of 100,000 round of 45 when I was younger and competing.

I have no idea what they might sell for but an auction should seek the correct price level if it works right.
Phil

Yes, the Lee discs work great.  I have one that I have been switching between my two presses.  I also have a new RCBS Uniflow with the micrometer adjustment and the case-activation linkage.  It fits but is a little crowded but it is a sweet machine. OP

But be cautious about the RCBS Green Machine

bruce martindale wrote:But be cautious about the RCBS Green Machine

The best software in the world is the stuff you just bought and haven't installed yet.  That powder measure is not so good?  I have not tried it.  Assembling the micrometer and the case activation linkage seemed pretty good except maybe the force needed to get it to dispense.  Is that the issue?

The auto champ IV is a good unit. Best of the series.. find a 45 conversion convert the powder drop and go with it. If the unit is in excellent condition then it should bring good money. There are folks that collect and use older loaders.. would bring more $$ with the 45 conversion .

Thank you, @jglenn2.  I will get it organized, photographed, and onto eBay  It does have the hardware for both .45 and .38.  From their literature it sounds like the .38 hardware will also work for 9mm.

My other press, which I'll keep for a while, has both calibers and the AutoChamp case feeder as well.  That feeder is not the mechanical engineering profession's best gift to shooters but it might be of interest to collectors. 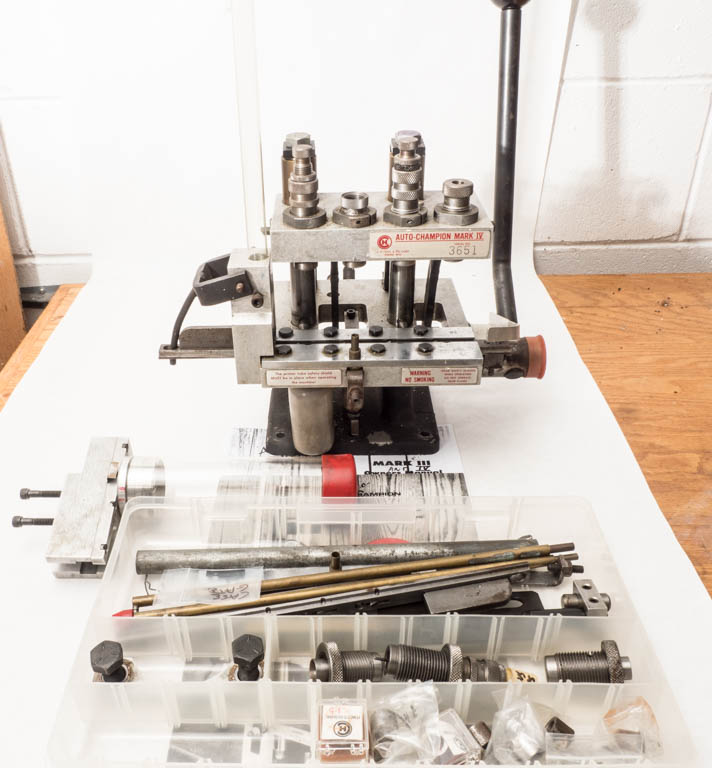 Kit includes setups for both rimmed (.38spl etc.) and rimless (.45ACP etc.), powder system, etc.  Dave Davison, owner at CH-4D, advises me that he has almost every AutoChamp part in stock, far more than he lists on his web site.

Quite a few yrs ago a shooting friend aquired an Auto-Champ 2nd hand but unused. He worked in a die shop and made some changes to the machine.
The time came when a nice star became available and he turned it down because of his experience w/ the A-C.
His ability to rework machinery makes me wonder if the avg shooter would find the A-C satisfactory.

The inline CH went through an evolution of changes over its lifetime. the IV is a very solid unit..lots of folks uaed them in their time.. RCBS never could make an auto loader worth a flip for some reason.. i even owned a Cougar and Hunter which was a smaller version of the CH inline made by a couple of guys from the original CH family..sold it to a collector several years back.. Still have my old CPM although given the price i saw one sell for on eBay this year i should sell it and buy a 208

Colt711 wrote:His ability to rework machinery makes me wonder if the avg shooter would find the A-C satisfactory.

I don't know.  I have all the gadgets: 3 axis DRO precision mill, 11" Logan Lathe, Dialarc 250HF TIG welder, small press brake and shear, ...  With all that I have never had to make any significant mods, the biggest being a new chute for the finished rounds.

That said, and others have pointed out, the AutoChamp powder system is kind of clumsy and will dump powder even if there is no case below.  I did what others have also done and use the Lee Pro Auto-Disk case activated powder measure.  Cheap and works like a dream.

I don't think the Lee discs were available when my friend got his. Possibly he just wanted to "improve" the machine. I don't know if he had the same version  as you either.......... I would have served you all better by not commenting.

Not a popular factory progressive that doesn't have a ton of aftermarket pieces for it..nothing is perfect for everyone..