I have two 11 oz.cans of this with the metal seals still intact. Can anyone tell me how old they are? There are no dates on the cans. 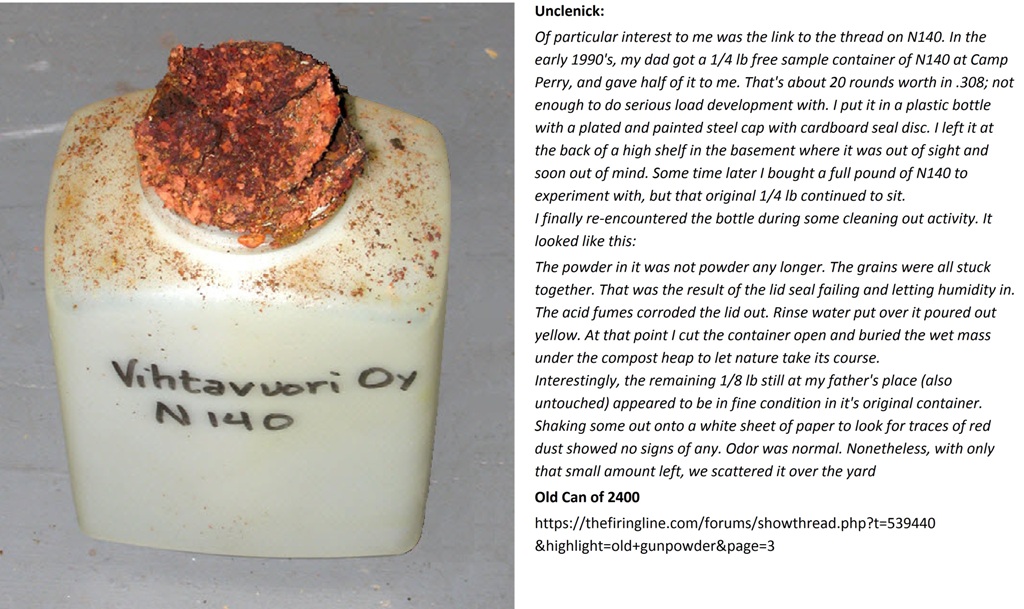 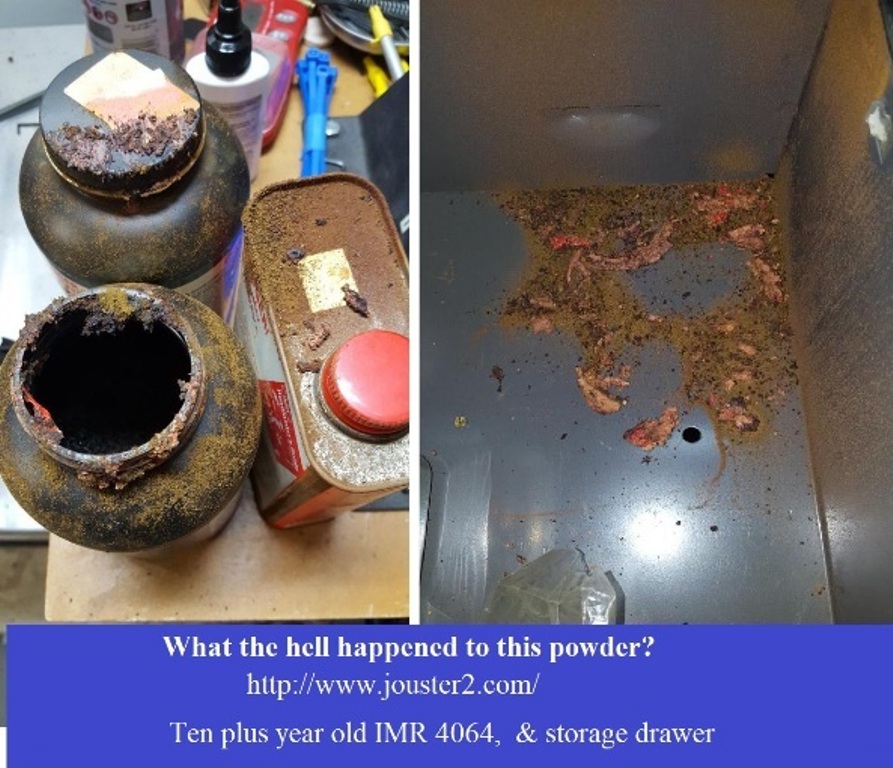 The shooting community has been generating its own myths based on the information to keep gunpowder cool and dry. That is good advice, but even when gunpowder is kept cool and dry, it is still breaking down from a high energy compound to a low energy compound. The worst enemy of gunpowder is heat. Even in cold Norway, munitions deteriorate when they age: An Examination of Deterioration of Ammunition by Storage This Norwegian study is on the DTIC site   https://apps.dtic.mil/dtic/tr/fulltext/u2/a055897.pdf

Gunpowder breaks down exponentially fast with regards to heat:


r. The great care taken in the purification of nitrocellulose is due to the necessity of removing impurities that are much less stable than nitrocellulose itself. Cellulose sulfate is unstable, with respect to heat and moisture.


The propellant management guide  has a section on what the Navy used to do:

Technical Manual Safety Surveillance of Navy Gun  Propellant, Policy and Procedures,31August1996, is the best source for detailed information beyond the scope of this chapter.


a. The history of the Navy propellant surveillance program is very similar to that of the Army. Established at Indian Head, Maryland during the immediate post-World War I  period, the Navy program was physically and technically a virtual twin of the Army program, which was begun just months later than that of the Navy in the year 1921. The oldest physical remains of both program's early days, the large, circular propellant heat chambers, appear to be built from the same design, during the same time period (1940-1941). Neither set of chambers at Indian Head.nor at Picatinny are the“original”1920's-vintage structures, which were based on steam heated chambers which proved to be insufficiently reliable.

b. Auto ignition of propellant in the powder magazines aboard ship has caused the loss of many warships from the navies of various nations, most losses having occurred in the first few decades of the 20th century. The risk of unstable propellant aboard ship was so great that, even after more effective stabilizers were introduced during the second decade of this century, close monitoring of all the fleet stocks was considered essential. In fact, prior to 1963, each activity and ship had its own testing oven and was required to run a 65.50C surveillance test for 60 days each year on every lot of propellant in stock. Propellants in many configurations which would be considered safe for use by the Army (such as propellant loaded into fixed rounds) were and are routinely condemned and destroyed by the Navy as too hazardous to be aboard ship, where even a minor deflagration can cost the lives of the sailors and marines aboard, such as that which occurred in the powder magazine of the USS KEARSARGE, killing 10 sailors.


c. Information necessary to assure the safety of Navy propellant stocks(and the vessels upon which they are stored) is provided to the fleet as well as storage installations (Navy coastal and SMCA locations) through the monitoring and testing of all existing Navy propellants. The Navy Gun Propellant Safety Surveillance program produces this information through its two programs, the Master Sample Program and the Fleet Return Program.

The gunpowder used in large caliber weapons is slightly different in composition from rifle powder, the grains are larger, the burn rate slower, but it is all based on nitrocellulose. this chart shows how quickly gunpowder deteriorates with respect to temperature.

Ionic materials attack the double bonded NO molecules in nitrocellulose, and so rust in powder tins is bad, water is bad. Water is polar covalent and the oxygen end attacks the NO double bonds.


Really, there is no positive to old gunpowder. If your powder does not smell, does not clump, and it does not blow up the gun it is fired in, then, shoot up that old stuff before it does go bad.

My plan is when I get caught up with loading for this summers bullseye I will open one and load some plinking rounds for my gp 100. The empty cans will get cleaned up and made into pencil holders..