Wind, gusting changing wind.  Smooth Squeeze impossible, A good day, is black to black hold.  Bad is paper to paper.  But everyone is shooting in the same wind. Happy there is no “range pudding” to march through.

Revolver day, Missed my HR T-shirt.  Had the right score but the wrong number of X’s.  I normally win one every year so didn’t put any effort into practice.  That would explain why I didn’t score as well as I should.  Won’t happen next year.

DR match: On the 2nd string of rapid fire, Commands going down and deep in the trigger but no turn, Abort, sit the gun down, step back and raise hand.  Next to me a shooter let one go. Targets never did turn.  Not exactly sure how to alibi this.  Range alibi as the targets did not turn when they should have.  Early shot when targets did not turn that means shooter accepted the range conditions?  What happened was, without looking at his target, Changed his target and shot a 5 shot string.  Big discussion with refs and range people. Reinstall his original target with 5 plus the early did not turn skidder then gave him a 10 second 4-shot re-fire string.  Four shots?  Never heard of that.

Shot my snub nose Colt detective special in the DR match. Sometimes you don’t need more than snubby.  Shot a 209 with it and all shots hit paper.  Doubt that was anywhere near the cut off but had a good time anyway.

Pre-lim day – Turning target problems, Range delays, Eagles, boaters, and malfunction on my range.  LONG time in the sun.  Spray on SPF-30 not cutting it.  Re-apply several times and still feel like bacon in the pan.  Drink and drink more.  Big muscles giving me a fit.  Need to nibble on something salty.  Not eat, nibble.  So after my 10th year coming to Camp Perry, I’m getting to learn the switch from 50 to 25.  Not once did I feel rushed.  You need to get a sequence and keep to it.  Three man Pre-lim team did well.  Thanks to Cardinal Center, and Brunskill Armory for your support.  We had a ringer, Glenn Zimmerman on the .22

Thur .22 day – wow was it windy.  Worked hard to shoot that 6.  Pick it up get immediately on the trigger and put it back down the wind too gusting.  Lift and repeat several times.  Going to have to shoot the string at timed fire pace.  Scores were ugly. Not just for me but for all. Had some personal things to do so left after 1st relay and didn’t shoot team. 840-21x

Fri CF day – Still windy and hot but I’ve got a gallon jug for water and SPF 70+.  Didn’t make any mistakes and tried my best to stay in the trigger once started. Saved a round in rapid fire.  Haven’t done that in a while.  Didn’t feel rushed, usually if I’m running behind I know it.  Ended up targets were not there and I was only 4 rounds on target.  My scores “felt” better but after checking the wailing wall turns out my .22 were better.  834-20x, could have been the saved round.  Still windy for teams but managed a fair score.  Had to bolt after teams and didn’t attend the shooters meeting.  Ted does a wonderful job and make sure your suggestions and recommendations are known to him.

Sat, .45 day – Big surprise, still windy but lower humidity and still HOT. Getting in the swing of things.  Spent all the money I needed to spend.  Didn’t go overboard.  Seen all my old bullseye friends and made a few more.  Didn’t see Tony Brong this year.  Did I just miss him?  Only person I wanted to say hi to and wasn’t able.  Hi Tony and I’ll catch you at the next match.  Finished the day with 835-24x and shot fair for the team.  Saturday NRA Awards.  I don’t remember the guy’s name who sang the national anthem.  WOW, he has a set of well-tuned pipes.  Nothing fancy but sang like it should be with GUSTO.  Standing ovation as he handed the microphone back to Dennis who was completely gobsmacked by the performance.

Sun P100 & NTI.  I had a decision to make.  Glock was offering a free pistol for high Glock shooter, Springfield Armory was offering a free XD for anyone shooting an XD and making the P100 cut.  I’m pretty good with the Glock but not sure I’m the “best.”  Last year, 2015,  a 160 something took the free Glock.  (Not so this year)  I decided I wanted to shoot the XDm 5.25 in .45 ACP.  I shoot it very well and the gun is about as good as it gets without being a Browning designed masterpiece.  And I already have all the Glock pistols I want, and another XD would fit right in my safe.  Last minute John Zurek asked if he could borrow my XD for the P100.  I know him to be an excellent marksman so no problem.  With a brand new to him XD he shot 364 (awesome)  Second relay I put down a couple of fair slow fire targets then a good timed fire.  Had an on the paper miss in rapid.  Not exactly sure where that came from.  I normally know if it was off target.  I didn’t know and have not come to grips on exactly which shot it was.  Low right for anyone who can suggest something other than stoopid finger squeezer.  Finished the match with a 354 over the cut and worth a free pistol THANK YOU VERY MUCH.

Went to the CMP air pistol range and shot my 60-shot match.  543 which isn’t bad but nothing to write home about.  I went to the shooters reception before changing clothes.  (Keeps the BBQ stains to a minimum.)  CMP award ceremony was nice.  I didn’t trip going up the stairs (woo hoo)

Hind sight thoughts.  In that much wind, I should have taken the dot off.  Just shoot sight alignment.  You can NOT drink too much.  Small salty nibbles would have been nice.  Stronger SPF.  A better sun hat that doesn’t flap in the wind.  Pith hat next year. 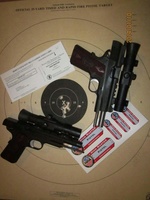 It was nice meeting you several times. I was also on that dr relay. Don't know how they worked out that early shot fiasco.

Of course it wouldn't be proper unless you shot a Webley in the revolver events!

Haha I want that hat! I'm gonna shoot DR next year with a snub nose

If you wore the US style helmet, you could well shoot the 1917.

I had 2 new experiences at Camp Perry this year and I'm not sure which was more surprising. First, on the last string of the last target of 45, at the load command my gun went full auto and sent 3 rounds into the dirt. Second was seeing Motorcycle Dan in a coat and tie at the CMP awards.

I've had a couple of 22's double in my shooting career, but this was the first time it's happened with the 45.

The good: I had a firm grip and the gun was pointed in a safe direction so no one was hurt. The muzzle didn't even rise that much. I kept my composure, declared the gun disabled and shot my backup for the last string with only one 8 and a couple of 9's. It wasn't until after we were done that I got the shakes.

The bad: There is a good chance it was user error. I immediately took it to Rock River for inspection. There was nothing broken or worn. The gun easily made weight, but the sear leaf was lighter than they prefer, so they added some to the sear and took some off the trigger leaf. I haven't adjusted the trigger since last year when they did some work on it, but it's possible I changed something while cleaning. I normally hold the trigger back firmly when releasing the slide. After the burst I realized I was not as firmly on the trigger as usual. I think the trigger was back, but I have to face the fact it was probably my fault. Both the gunsmith who built my original wadgun and Chuck at RRA recommended holding the trigger back, though I learned after this that the first gunsmith no longer says that.

There wasn't time to take it to the function range, so I'll have to test it at the home range, first 10-20 times with only 1 round, then with 2 rounds.

I wish I had shot better. Usually there are a lot of targets that look about average with some better and some worse. This year I was missing all the "better" targets.

There has been some discussion about the wind. Yes, it was a bit tricky, but I don't think it was any worse than most years. I was on the M/HM relay and there are only a few times when there weren't lulls. I am quite certain that most of my lost points were me. I honestly can't look back and see more than about 10-15 points lost to the wind total across the whole week.

Steve,
Thanks for your humility in sharing the full auto mishap. Glad you weren't hurt. I know someone whose 5th round went through the brim of his hat

I had bought a custom pistol directly from big name builder when I first started shooting BE. Went full auto 2nd time I shot it. Had large impact on why I became a gunsmith but thats another story.
Jon

Wear one of these and you would have to shoot an M-16 or a clunker .45. Sometimes the right head gear and "shoes" makes life a lot easier. 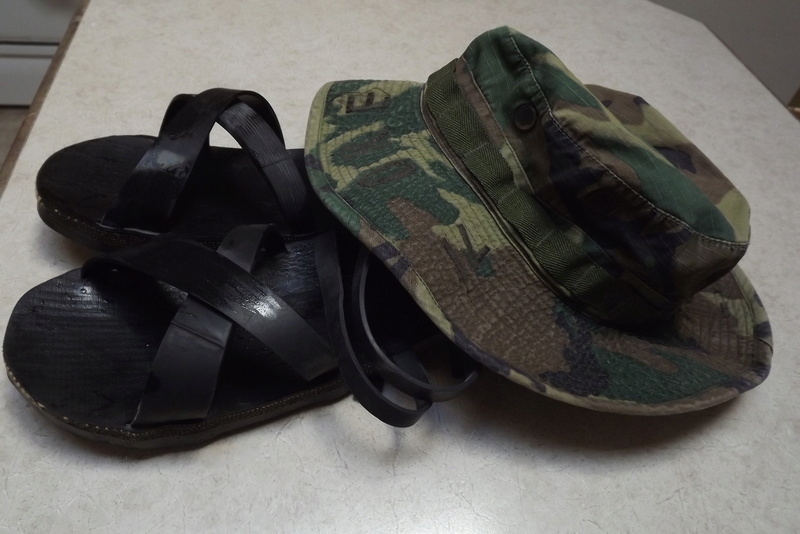 Yep, that was me that let one go.  The way it was explained to me was that, had the targets turned, even a second or two late, I would have had that one miss, since I had shot before they turned, and when they turned I would have still had 10 remaining seconds to fire the last four shots.  They were trying to put it back to as if the range had not malfunctioned.  Some folks were upset and some folks thought it was funny.  I was just confused.  Either way, I shot a 259 with the miss, so I was happy since it was one of Dan Norwood's guns that I had no idea what the zero was.

This was my first trip to Perry as a pistol shooter, although I have been several times for rifle.  I made President's 100 and got DR points, so I met my goals for the trip.  I have to say, having never fired without overhead cover or in the wind, I was completely unprepared for the conditions.

Enjoyed shooting next to you, see you there next year.

Dan, it was pleasure to meet you in person and an honor scoring your P100 and NTI EIC targets (and I wish I could give you that 5 instead of a miss but it was way too far

) Hope I will see you again next year!

OldMaster66 wrote:Wear one of these and you would have to shoot an M-16 or a clunker .45. Sometimes the right head gear and "shoes" makes life a lot easier.

I have a pair of those Ho Chi Minh sandals (original). They could do amazing things with tires and inner tubes. The boonie hats are long gone.

Focusing on the target... 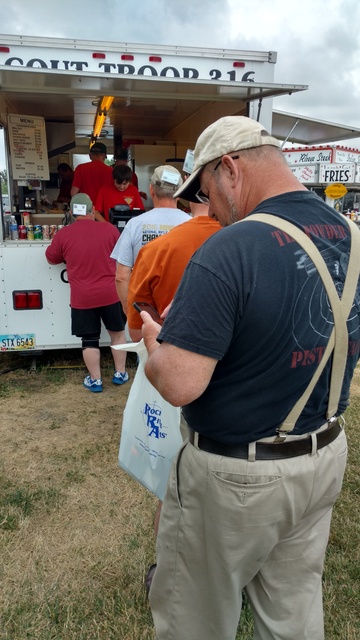 I only shot the CMP stuff and did just ok. My highlight was a 349 4x in my first  Presidents. 1 point away....... Lots of mental errors including not adjusting my sights up till AFTER my first string....A few tips from Dan got me here from last year. Better, but plenty of room for improvement.

Hard at work with Pokemon Go