It's my fault for not practicing much at fifty yards and discovering this earlier, but I really don't need this problem three weeks before my first BE match.  I don't want to have to be doing 'load development' any more this season, but I'm glad to have discovered this now. 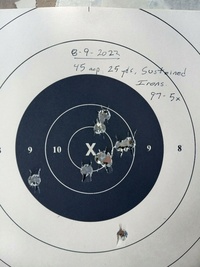 I've tried all manner of 148gr swaged bullets and indeed 50yd accuracy is lacking. I've got 2000 Rem 148's from Precison Reloading and I am hoping for the best. Never tried them. I'm not going to push the bullets so fast that it equals the recoil of my .45. No point. I'm now trying W231 and then might resort to Power Pistol, which might have some merit. I tried 4.0gr of W231 with a Berrys 125 and the results might indicate that I indeed go to a lighter charge. 4.2 to 4.6 was absolutely horrible. The 4.0 load had 2 three shot clusters about 3 1/2" apart. Years ago I gave up and just used my .45. Now because of bad shoulders and elbows, trying again

inthebeech - you mention using Speer HBWC bullets before trying the Remington HBWCs. Were the Speers the 'new' ones with that hard, slippery-feeling coating/lube on them? If they were, I'd wonder if that wasn't the reason for the poor grouping.

My own anecdotes: I tried the Speer HBWC over 3.1gr W231 out of a 6" S&W Model 686-5 revolver with the 'new' EDM-cut rifling in the barrel, and found it couldn't group worth a darn. My shooting buddies all tried the Speer 98gr .32 HBWC bullets in thei Hammerli 280 pistols and they were also experiencing inconsistencies (and even keyholing). When we all switched to something else (I went with those Remington 148gr HBWCs in my wheelgun; they went with Magnus Cast 98gr WCs for their pistols), acceptable groupings (with no keyholes or uncalled fliers) returned.

One of the challenges with shooting the slow .38 wc is you have to have really good follow through to not "key hole"  even with the best ammunition.

Ok, not that all of this advice was not useful; in fact there are some great tips.
But I have to come clean or perhaps this final bit of information will cause fellow shooters to keep an open mind when encountering similar problems.
Somewhere in the early history of this revolver, I lodged a bullet about an inch from the muzzle and, you guessed it, pushed it out without even knowing it and bulged the barrel.  Becaue I did not notice it, the search began for the cause of sudden inaccuracy, which led to the start of this thread.  I have since had a great revolversmith replace the barrel and guess what?  My original load is once again shooting ragged holes at 25 yds with very little effort.
We never stop learning.

50 Yard target, Ransom Rest, Star Reloader of course.
In case you can't read the data on the target, 2.7 grains of 700X, Remington 148 Grain HBWC
Winchester SPP and I think it was Federal Brass, but it might have been Winchester.  I use both but I don't mix.

At an average velocity of 793 fps, that's about the same speed as my 45 wad loads.

Good luck in your quest. In my experience .38s are fickle. When you do find a load they aren't very forgiving if you are not doing your part. 2.8 or 2.7 of Bullseye behind a HBWC is usually an ok load and leave some lead showing.

A lot of good info has been provided by many. My thoughts are these:

I have never attended a pistol match where the shooting was done by Ransom Rests. Tailoring the ultimate load is useless, if you don't shoot that load well out of your gun, from your hand(s) during the allotted time for the strings. Instead of best accuracy, I look for acceptable accuracy range given a shooting distance requirement. From there, I try to determine if there is a load, a bullet, a powder combination, that permits "me" not my Ransom rest, to perform the best. Sometimes, it may not be the most accurate load.

I have some guns that have a slight edge on accuracy, and others which for whatever reason the trigger feels better, or I shoot it better. My preference for shooting a match is the gun with the "better" trigger "to me" as long as the accuracy is within that acceptable range. It doesn't matter how accurate your load is, or how accurate your gun is, if off hand, you shoot too many bad shots with it because of the trigger, grips, sights or whatever else. The Champion is often not determined by the best shots on the target, but by the fewest number of poor shots on the target.

WC velocities: Let me just say there are a lot of folks who shoot .38 spl 148 gr WC in NRA Action Pistol where we have a power factor floor. To reach that floor the bullets need to chrono at 810+fps. Most will load with a cushion 4-5%, so they run 840+ fps. ZERO, SPEER and "sometimes" Hornady HBWC will shoot 2" or less at these velocities, and many who run cast DEWC may go to 870-890 fps. The accuracy standard is 2" maximum at 50 yds. The point being, that 2" of less 50 yd groups are obtainable with 148 gr WC's from the high 600 fps to almost 900 fps. Most HBWC prefer the lower speed range, some DEWC or BNWC actually prefer the higher end. Bayou Bullet 138 gr BNWC run best around 900+/- fps. So sweet spot is one thing, acceptable accuracy range is yet another.

Good enough for me not to reinvent the octagon wheel,

It is possible to spin the wadcutter faster and get a little extra range before stability problems. Colt barrels have a faster twist. The real problem is that the wadcutter has serious aerodynamic problems. When I tried semi-wadcutters suddenly the problem went away and the S&W 14 became fun to shoot at the 200 yard rifle gongs.
I have tried shorter wadcutters and shot plenty of wadcutters in 45 colt, 45ACP, 45 auto rim, 44 mag and special, 357 and the 38. None were worth a dang beyond 100 yards. Most were not stable at 50 yards showing a little extra on one side of the holes in the target. All of them loved Keith designs at astounding long ranges.
My cure for the double ended and hollow base wad cutters in 38 special at 50 yards is the semi-wadcutter.

PPC, it's all caps please!

Maybe too late for this train.
The HBWCs are notoriously sensitive to tipping caused by inadequate follow-through. Please review your targets for bullet holes that are not perfectly round, slightly oval, caused by a wobblely bullet.

Dave C. wrote:An inch and a half at 25 yards is not a good load.  Keep looking.

Dave C,
What group size would be a good load?
Thanks,
Ron Habegger

Dave C. wrote:An inch and a half at 25 yards is not a good load.  Keep looking.

Dave C,
What group size would be a good load?
Thanks,
Ron Habegger 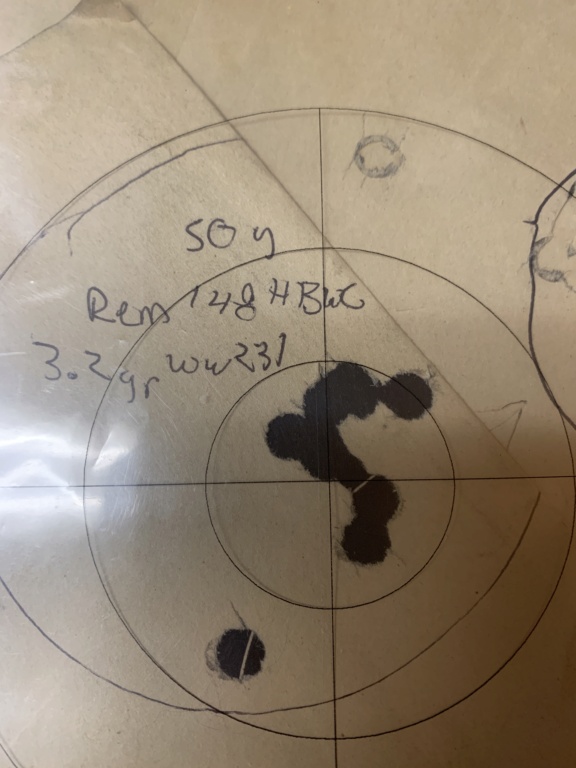 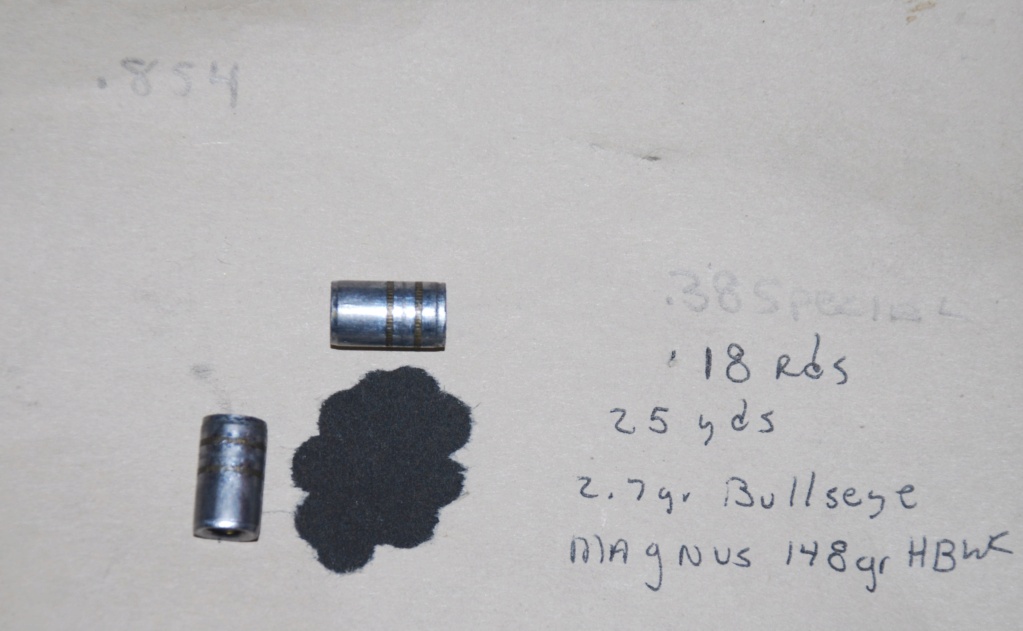 A Quarter and a Silver Dollar will work.

My testing will be no surprise to other experienced shooters, the harder the lead alloy the faster they need to be driven.

I personally observed this phenomenon shooting Federal GMM in a Colt OMT at the NC Service Revolver Championships. My 8- and 7-ring impacts on the long line were all oval with offset smudging. Hopefully the pic shows up. 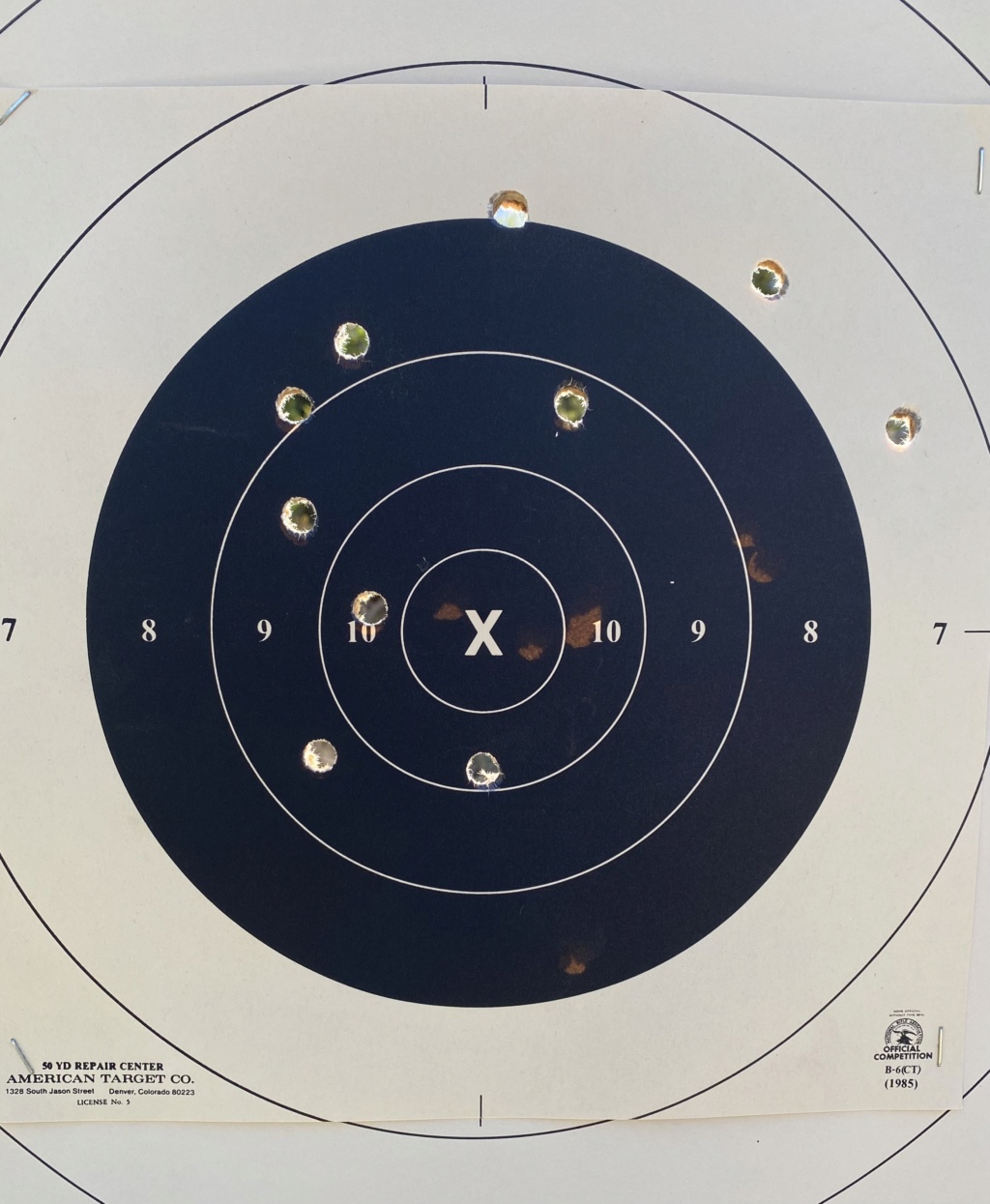 Barrel is a K38 machined to fit my barrel tester.

Note the "smudges" on the holes. 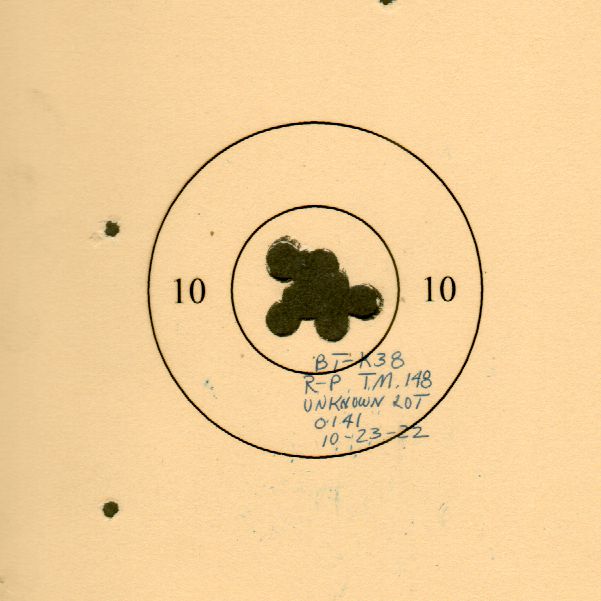 Here are some better photos that show what we observed with overlays while scoring: 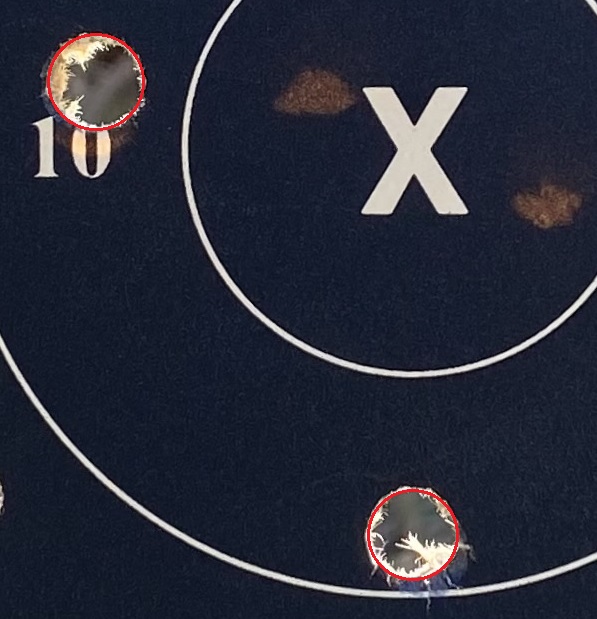 I had some input from folks on the line indicating that had similar problems with some lots of FGMM due to low velocities.  Shot great on the short line, though.

Barrel is a K38 machined to fit my barrel tester.

Note the "smudges" on the holes.

Dave,
Is the K38 barrel and early 14 barrels the same? I have a 14-3 that shoots hbwc extremely well. Everything else is a crap shoot.
Jon

I was gifted a bag of K38 barrels. They are all pre-EDM rifled. I picked out a nice looking one and machined it to fit my tester.

Mine is chambered with a SAAMI 38 WadCutter profile.

The goal was to test ammo with a slow twist to simulate a M52.

With the lathe turned round K38 barrel I have fired many ten-X groups at 50 yards with various bullets, weights, brands, swaged/cast, etc...

I have friends that own K38's that shoot good groups at 50 yards.

I cannot explain why one K38 shoots well while the next one does not.