I have an older Pardini SP .22 and the rear shock absorber is  shot(pun intended) I can order the new one but on first glance don't see the obvious way to replace other that it seems that it is press fit into the rear of the frame. Has anyone done this and if so how did it go and any thing to be aware of and watch for? On the Pardini site there is a listing of a rear shock absorber screw but not on the diagram and Karen at Pardini says some guns had one and other not. Any advise appreciated.
Ed 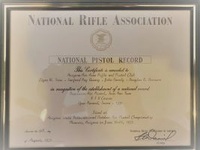 The following applies if your buffer looks like a mushroom with part of the head clipped off.

Push out the old buffer from the rear of the frame.

Super Glue the new buffer to the end of a wood dowel.

Push in the new buffer then wiggle the wood stick to break the glue bond.

Thanks Dave. When the buffer arrives I'll give it a try.
Ed

I removed the grip and punched out the old buffer from the rear.

I used white lithium grease to hold buffer to the dowel. Buffer pushed in without any trouble. Easier than I thought it would be to change.

Thanks for the info.

The new buffer should be here Wed. and I’ll try to install it. My Pardini is an older model, Karen asked for the serial # and when I gave it she said you realize that they are in six digits now, mine is four.  I bought it from Don Nygord when he lived in Prescott but the gun still had his CA address on it. I had met him when he shot at several matches at Phoenix Rod and Gun club in Phoenix. I hadn’t shot the Pardini for many years but Prescott Precision Shooters began having Bullseye matches at the Wilhoit range near Prescott so I dug it out of retirement so my son and I could shoot. When I took the grip off so I could get to the trigger position adjustment screw better the buffer, or rather pieces of the buffer fell out, hence the need to replace it. I don’t recall ever replacing it and have shot several thousand rounds many years ago.