What is a safe way to dry fire my Model 41??   Is an empty case in the chamber good enough or is there a dry fire gismo I can purchase, make?  Also where are places I can purchase 41 parts such as a firing or springs etc.
Thanks in advance

Have you decided to make any more of these? I would like two if you do.....Thanks....Ray

Put me down for one as well.

Fezzik68 wrote:
Would you consider making 2 of these for me?  Thanks Ray

I am dusting off my 3D printer and will be in touch.
I've been cleaning out Dad's workshop(s) since he passed back in Sept.
Work, leagues & cleanout have kept me busy.

I'd take a few too. I imagine these last longer than wall anchors by a long shot. Has anyone ever worn one out?

I'll sign up for two as well if you're willing to go into a short term "production run".

I would take several also ! 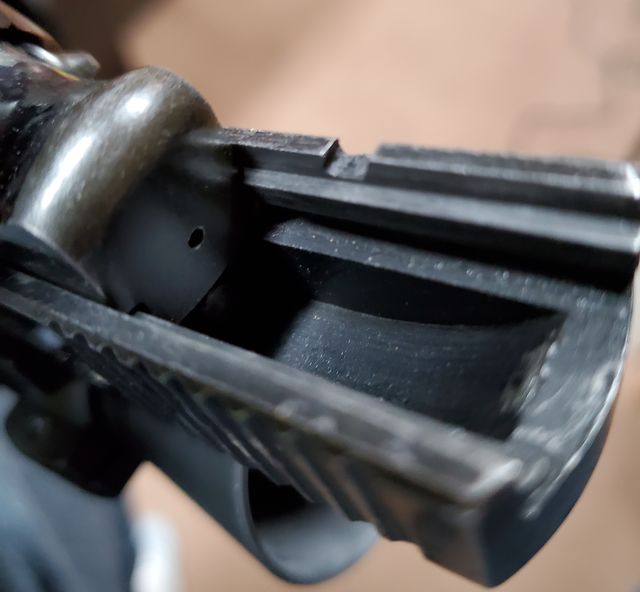 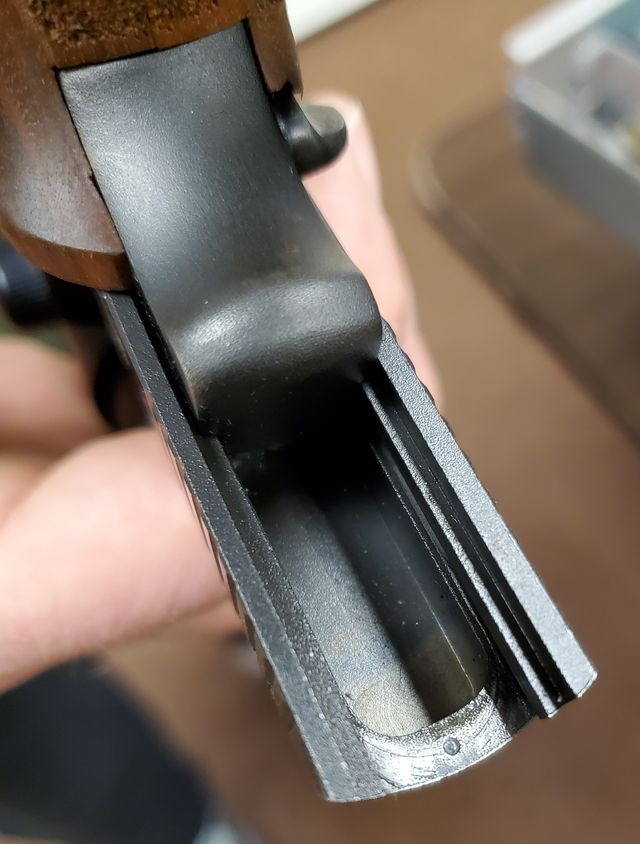 Big difference in how the plug is made.
I am currently without a CAD program for home use, last good one went subscription.

The only 3D model I have is for the newer style.
The plugs will eventually wear out. They de-laminate.
Baby blue is cheap PLA, I changed to Carbon Fiber PLA and they last longer.
The hammer hits where the dent is on the right side& it never hits the firing pin. You only need to pull the slide back enough to cock the hammer. Easier than chamber plugs. 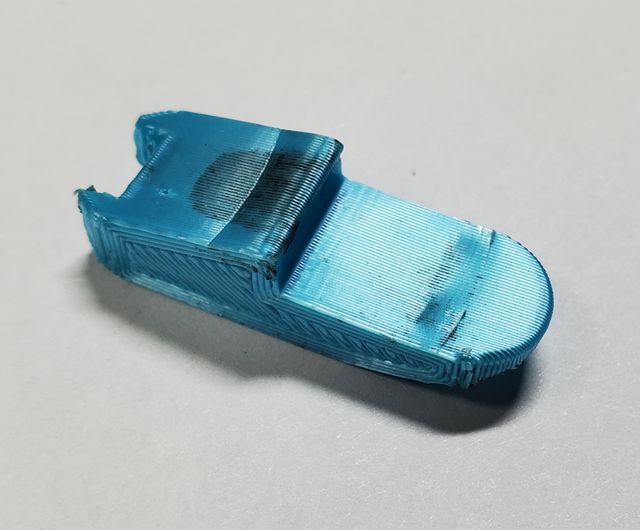 Sits this way. (Disassembly for pic only)
Pull slide back, drop in, slide forward, dry fire.
*Remember to take it out before the match! 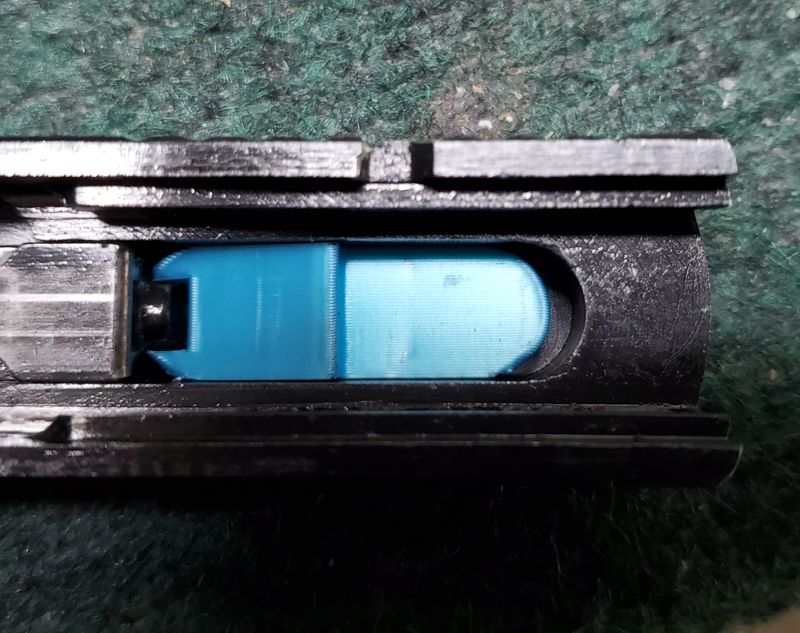 Mine are the newer style, if they will be available I would still like 2 when available.....Thanks Ray

Mine are the newer style, if they will be available I would still like 2 when available.....Thanks Ray

Mine is also the newer style so I'd like 2 when they may be available.

When I bought the Clark barrel for my 41, I spoke to a lady who was on the Clark Shooting Team.  She told me she constantly dry-fires her 41, with no issues.  I checked that there were no signs of impact from my firing pin on my barrel, and tried what she suggested.  For years, there have been no issues, and no signs of any potential damage.  I wish I could remember her name.

This was with the Clark barrel that I bought.  I never asked her if that advice was equally true for Model 41 standard barrels.

I would still be dry-firing that gun, had I not eventually settled on my Nelson kit.  Speaking of the Nelson, Larry Nelson tells me I can dry-fire that gun as much as I want, and it will not cause any issues.  In the past, as I recall one person did have issues, so Larry redesigned the parts.

I still love my Model 41, and my High Standards, but I pretty much settled on the Nelson, for lots of reasons. My other guns are "prettier", but the Nelson seems to be as good as it gets - for me.  Dry-firing the Nelson is like dry-firing a standard 1911.  Do it as much as you want, no snap-caps needed.

Another shooter on the Army shooting team came to my range with a Pardini, and let me take a few shots with it.  Lovely, beautiful, fantastic gun - but he tells me he gets equally good results with his Nelson.


Meanwhile, back to this thread, you might consider calling Clark, and asking if they have any of their custom barrels in stock.  They come with a built-in rail, and they have three to choose from.  Someone else in this forum will need to tell you how the Clark barrels perform compared to stock - my only stock Model 41 barrel was the long version, 7" I think, with open sights.

Regarding how Clark 41 barrel shoot here Is a 50 yard 10 shot group. 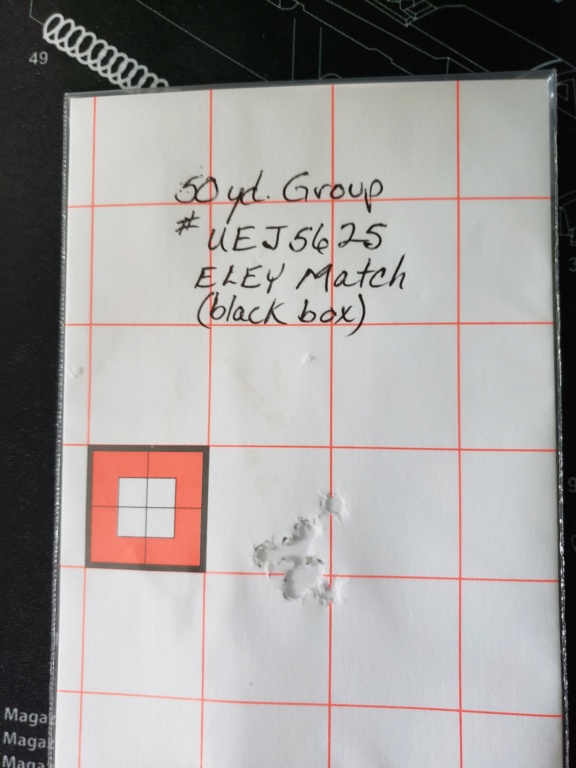 No problem,  you did fine!  Thanks for posting.

Did you do a similar test with the stock barrel?

I nice bonus is the built-in rail, that allows you to mount the sight very low.

Someone better than me will need to tell you "how good" it is, but in the discussions long ago, everyone was very enthusiastic about it.  I certainly have no complaints.

(My 41 mostly got replaced by my Nelson Conversion, but I've got lots of good memories, and never really even considered selling it.   It was the third gun I ever bought, and I had no idea why I would want it, but my co-worker told me I'd appreciate it later......)

The price is a bit expensive I should know as I paid for one yesterday and FedEx will have it Monday.
A 5 1/2 BOP with Black and Black sights.

The price is a bit expensive I should know as I paid for one yesterday and FedEx will have it Monday.
A 5 1/2 BOP with Black and Black sights.

I have to admit I was a bit astonished at the price, but I figured it would be one barrel to rule them all. Now I need to find a 41!

You will have time for your search. I ordered that barrel, along with trigger and Clark's reliability work 7/2021. Yesterday it was ready for shipment.
You might have a much shorter wait time as they have had issues obtaining barrel steel this past year. Hopefully that issue has passed.