I shoot both NRA an ISSF and have been competing with my 1911 .45 in both. Yes, I know that .45 is not allowed in true ISSF but in our informal matches we allow .45 since not everybody has a.38 or below CF.  In NY you cannot buy a Walther GSP in .32 centerfire because it is considered an assault weapon due to the magazine being in front of the Trigger guard. Same for the Hammerli. That leaves only 38 Midrange Autos, Expensive and mostly D/C models, or revolvers. The revolvers work fine for slow fire and Duella but are a considerable handicap in NRA Centerfire sustained fire. My thought is to build a centerfire gun on the same 1911 platform I have for .45, but in 9mm. Any thoughts on this or does anybody compete with 9mm in centerfire and shoot .45 in .45 only? Are there any disadvantages to my centerfire solution. What are the best target loads for 9mm for 50yd accuracy in both powder and bullet, lead bullet weight, configuration and availability? Thanks, I appreciate your inputs. Paul

I think a 1911 is either 9mm or 38 special is the most "sustainable" solution, in terms of support for the platform. Target 9mm loads are generally a bit fast, so probably no easier to shoot than your 45, but at least legal. If you reload and are looking at something custom, I'd consider a 1911 in 38 special. The older Colts and even Smith 52's weren't exceptional at 50, but a modern build with a fast twist barrel should shoot lights out at 50 from the right smith. Jon Eulette comes to mind.

Another option (with less support) would be a P240. Available in 32 and 38, but expensive.

I sometimes use a 9mm CZ for ISSF. The load is 2.7gr WST with a 135gr LRN. It shoots very soft, and it is plenty accurate at the short ISSF distance. The target below is from a recent match, during the slow fire segment (the indoor range is 20 yards). I blame myself for that 9. I'd say a 9mm 1911 is not a bad idea at all! 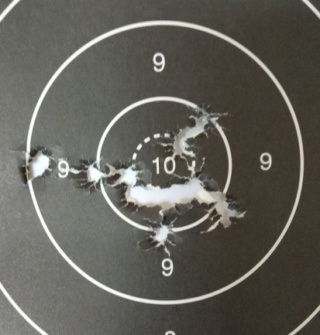 I’ve shot a ton of Int. CF and had practically every pistol at my disposal. I personally found the 1911 38 special to work the best for me. I’ve shot many 290+ precision series scores. I never shot the tight groups using 32 pistols. I guess I should say with the 38 I could shoot more center 10’s. I was using Factory Federal for 38 and Fiocchi for 32. Maybe if I had a Dave Wilson barrel and his custom loads I would have chosen differently.
I was a three man team member and we set national record in 1991. It was US Team selection match; I won CF match. So I know a little bit about shooting it.
I think John Bickar holds record for individual! Hopefully he will chime in.
I love 38 special, all the other non 45 CF calibers are for second place lol. I also use 38 for CF aggregate. For me it’s easier to reload good ammunition than other CF calibers. I also prefer 1911 grip angle and higher bore line than euro 32’s. Not as hard on my elbow.
Jon

I also have shot a ton of International Center Fire, but I've only ever shot the Walther GSP in .32.

Sorry, Paul; no advice for you on a firearm choice (but plenty of sympathy as a CA resident, where anything with a magazine forward of the trigger guard is similarly classified as an "assault weapon"

I’ve never played in the ISSF realm, but I’ve seen a lot of people try the 32s in NRA Bullseye and their success can be limited.  The only bullets and ammo that shoots well are Euro made and there isn’t a steady supply.  So you’re stuck with cast or re-swaged and I’m absolutely not sold that currently available powders other than Vihtavuori are worth messing with.  So that leaves 9mm and the various 38s.  There are issues with 9mm ammo in that each gun appears to be a law unto itself.  A lot of guns are very picky about bullet make and weights.  Most seem to have decent luck with 147 grain bullets even at the expense of “snappiness”.   The 38 1911 might look to be a solution, but it may prove illusionary.  Ammo is being made but it isn’t as common as it once was. Loading is difficult to get the consistency of the factory.

It seems to me that everyone is overlooking an obvious contender. The S&W model 52 is a great gun for both games.

I will post this everytime I read 32swl are difficult to load for. First load tried... 1.7 bullseye, cast and coated bullet sized to .315. Walther gsp.50 yard rr targer. 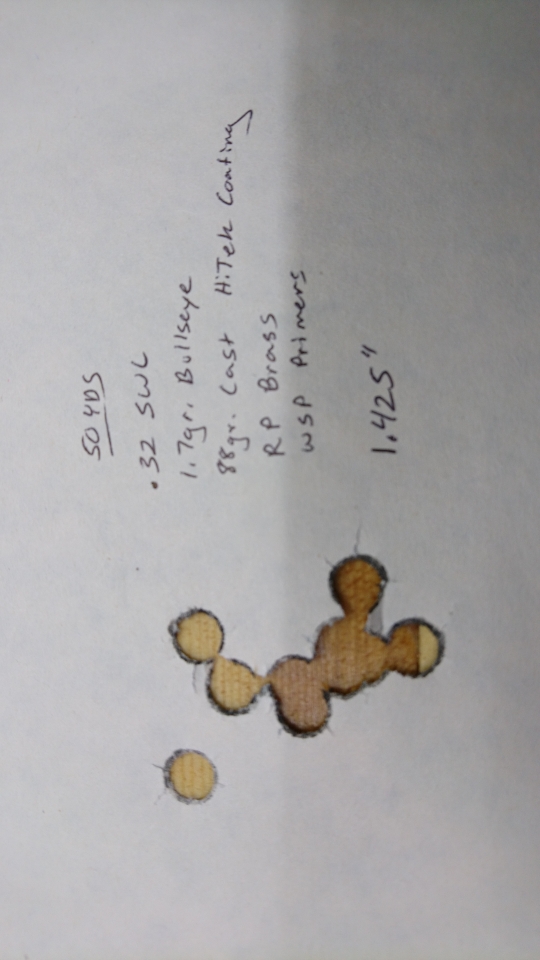 Well, I own a S&W 52….and it is dependent on which particular gun you get whether it is ISSF accurate.  For a factory pistol it’s fine, but to be really competitive it needs to be a bit better.  There isn’t customizable parts to fit in a 52.

Champion ISSF shooters can hold better than the 52 gun can shoot.

Which implies that you cast your own bullets to a non-standard size and then coat them. Even without any other considerations that, for me, puts it firmly in the context of "difficult".

So no - they aren't specifically hard to load for - but finding the correct component mixture for a particular gun / barrel to create that load can be a real adventure.

That performance is slightly better than I can get from either Lapua or MagTech factory ammo.

Given that I have neither the time, space, resources or even inclination to cast my own bullets I seem to be at an impasse. I have thought of swaging bullets for 50yd loads - but that's a whole lot of capital expenditure, never mind the ongoing effort, just to get one gun to operate at the long line. It will, of course, be a great gun for the indoor winter league but that wasn't exactly the intended use case.

Of course I could get Dave to make me a new barrel. Hmmm ....

I think your thinking too hard on this one. If your measuring charges to 0.01 grain, your process is already more detailed than mine. I do use the arrendondo micrometer powder bar on my 750 and the long expander from photoescape, but that's pretty standard for those loading the 32.

For the bullets, I use a standard Accurate 31-088W mold with soft lead (reclaimed pellets and shot) coated with hitek and sized to .315 with a noe push through sizing die. All of which, you can buy off the shelf so to speak.

A Lee lead pot, either a dipper or bottom pour will do the job. To be honest, I didn't even cast what i consider "good" bullets as the 32 is a fun distraction for me, not something I'm going to shoot a lot. My kid likes it so I keep making ammo for it.
Coating isnt that hard once you get the hang of it, and a cheap toster oven is all you need. Buy a few 2 quart plastic paint buckets from hardware store and you've got your coating containers...

It's really not that hard especially when compaired to swaging (where you have to cast cores anyway)... fit a bullet to the barrel and your 90% there...  btw, .314 shot REALLY bad at 50.

You could well be right. The problem is that I'm still learning the intricacies of the "less forgiving" loads.

If I had some ready, I'd send you some bullets, but I went in a binge a month ornso ago and loaded up all I had... ifnyou want, ping me arround thanks giving, ill have the lead.pot pot by then and can send you some to play with.

I had success with my GSP back in the early 90's with the highest score of 886. I loaded the ammo on a stock Dillon SDB.
The best bullets were Magnus. I had a 2x Burris scope on the pistol and while bench testing different loads could see the bad loads or bullets Yawing (is this the correct term?) between 40-45yards.
I just kept trying different combinations until I had groups like 10sandxs.
Hope this helps.

ps. It is much easier to load 32's on a Star Press and they don't break or wear out.