A Introduction into Bullseye AKA Precision Pistol Shooting

A Introduction into Bullseye AKA Precision Pistol Shooting

Get Into Bullseye Shooting aka Precision Pistol
Sherwood Veith
www.bullseyepistol.com

Once you've got the right guns and loads, all you need are steely nerves, a disciplined trigger finger, and a rock-solid hold to compete in this challenging sport.

Here's something new for you to try. Take a one-pound coffee can and spray paint the bottom black. Set the can on its side downrange about chest height with the bottom facing you. Now take your favorite revolver or pistol in one hand, standing up with no rest, and shoot 10 rounds at the bottom of the coffee can. If you need to, take 10 minutes. By the way, set the coffee can 50 yards away.

I've just described one-third of a bullseye handgun match, also known as "conventional pistol" in official NRA terminology. Bullseye is the granddaddy of all popular handgun competition in this country. Its three-gun, 2700-point format goes back to the 1941 National Matches and has been the standard ever since for national and state championships, regional championships, and most outdoor tournaments.

Today the NRA has 42,000 classified bullseye shooters nationwide, and that's not counting the thousands of competitors who compete in unsanctioned matches. An NRA-sanctioned bullseye match is a three-gun affair that requires you to shoot identical 90 shot courses of fire with each gun. Gun one must be a .22 rimfire pistol or revolver, gun two must be a centerfire pistol or revolver of .32 caliber or larger, and gun three must be a .45 caliber pistol or revolver. Most competitors use two guns for an entire match: a .22 rimfire semiautomatic pistol and a 1911-style .45 ACP. Using two guns instead of three saves the expense of a third match-grade pistol, and it requires the shooter to accustom himself to the recoil, grip, and trigger pull of only two guns. Even so, a Smith & Wesson Model 52 in .38 Special or a Walther in .32 S&W Long is occasionally seen on the centerfire line. Also, optical sights are allowed, including conventional scopes and red dot sights, although many shooters still use open sights.

The standard 90-shot course of fire begins with 30 shots of slow fire. In the slow-fire stage the target is placed at 50 yards and you're given 10 minutes to fire 10 shots. The targets are scored and repaired after each string of 10 shots.

The slow-fire course gives shooters fits. It places more stress on shooter and gun than the other two courses and is often the deciding factor in a match. At 50 yards the 10-ring-only 3.3 inches in diameter-seems minuscule. Inside of the 3.3-inch 10-ring is a 1.7-inch X-ring used to break ties. The mental fortitude required to concentrate on the sight and trigger squeeze while at the same time holding the gun steady with one hand is substantial. Most shooters worry more about their slow-fire scores than any other part of the match.

Having a gun that can keep 10 shots out of 10 in a three-inch group at 50 yards is necessary too. Conventional wisdom says that your gun and ammunition combination should be able to hold the X-ring at 50 yards from a machine rest. That's a 1.7-inch group, remember. Bull-barreled target .22s manufactured by Smith & Wesson, Ruger, Browning, High Standard, and many of 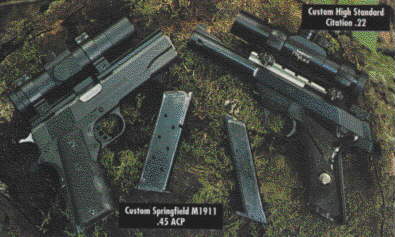 the European makers are capable of this level of accuracy right out of the box, assuming the shooter has done his homework with respect to ammunition. The 1.7-inch group with the 1911 .45 is much more elusive; it requires the skills of an above-average pistolsmith and solid load development.

Ammunition used for the .22 stage ranges from standard-velocity target fodder to expensive imported match grade stuff. Most shooters find what works in their gun from an accuracy and reliability standpoint and then stick with it, almost to a fault. We've all read time and time again how ammunition, powder, and primers can differ from lot to lot. If you are looking for match accuracy of 1.7 inches at 50 yards, then you must be prepared to test each lot of ammo.

For the .45, most competitors shoot 200-grain cast-lead SWCs purchased from a commercial bulletmaker over Hercules Bullseye powder and a standard Large Pistol primer. While Bullseye is the powder of choice and has been since FDR was President, my personal favorite is Winchester WST. WST possesses all the best attributes of Bullseye, but it burns cleaner. W231, Solo 1000, and HP38 are also used on the bullseye line. The key to match-accurate ammunition is to launch the bullet at 730 to 780 fps. If you don't have access to a chronograph, try 3.6 to 4.3 grains of Bullseye or WST and vary your charges by .1 grain. Odds are you'll hit a good load.

While this isn't intended to be a loading clinic, one final thought is in order: Top shooters weigh their cast bullets, whether homemade or commercially cast. Unseen air bubbles can cause more grief and bad scores at 50 yards than you can imagine. I weigh my slow-fire bullets to .5 grain, but other shooters vary theirs by up to as much as one full grain. The key ingredient is to weed out the really bad bullets that could be two to three grains off the average.

Yes, all this emphasis on accuracy is necessary to score well. The best shooters will "clean" slow-fire targets occasionally, and even an average shooter can see the difference between an 8-ring gun and an X-ring gun. If your gun and ammunition can't hold the X- or 10-ring, you don't have a prayer of ever shooting a perfect slow-fire target. Even if you're not capable of shooting a perfect score, you will still score better with topnotch iron and ammo.

After the slow-fire course is complete, the targets are moved to 25 yards for timed fire. Then 30 shots are fired in five-shot strings, 10 shots to a target, with 20 seconds allowed for each five- shot string.

Timed fire is considered the easiest stage of the match. The target is the same one used for slow fire, except only the 9- and 10-rings are black instead of the 8-, 9-, and 10-rings, and it's at half the distance. And 20 seconds to fire five shots is plenty of time. As a friend of mine says, timed fire is sustained slow fire. Top shooters shoot perfect 100's and 99's every time, and even average shooters will clean a timed-fire target on occasion.

The third and final stage is rapid fire. It's identical to timed fire: same target at 25 yards with only 10 seconds allowed for each five-shot string. There is nothing like standing on the line with your .45 in hand and shooting alongside 30 or 40 shooters during a rapid-fire string. The noise, the smoke, the adrenaline- you just have to be there to appreciate it. The top shooters shoot 98s, 99s, and perfect 100's every time in rapid fire. But for the beginner the .45 rapid-fire course is the most challenging. A .45 held in one hand-even with light target-load ammunition-is a handful, and a lapse in concentration during rapid fire is readily apparent on the target (or rather all over the target).

Take The Challenge - You'll Have Fun

Now for those of you with your face twisted up in knots wondering what's the point of shooting a pistol one handed at 50 yards with light-loaded ammunition, let me say I understand completely. After all, you've never shot a pistol with one hand and probably never will, you'll never practice with target loads that don't approximate the recoil of full-power ammo, and only hunters and silhouette shooters with steady rests shoot at 50 yards or more with a handgun and actually expect to hit the target. The point is bullseye is like Indy car racing. Practical? Maybe not. Fun and challenging? Definitely. It's so much fun that there are nearly 14 times more classified bullseye shooters than action pistol shooters. As for challenging, consider that no one has ever fired a perfect 900 out of 900 let alone 2700 out of 2700.

So the next time that tin can looks like a boring target, move it out to 50 yards and give it a try with one hand. You might find you have the steely nerves, disciplined trigger finger, and the rock-solid hold of a bullseye shooter. Of course, you might have fun too.

This article is a mirror of one of the same title from the Nov. 1996 issue of HandGunning. Copyright 1996 © PJS Publications, Inc. All rights reserved.

The Clearest Explanation of a Match

This is the clearest explanation of a match I have read. Thank you.

David, I also agree, it is a great write up about bullseye pistol. I didn't know there were that many classified bullseye shooters. Wow!
"Fun and challenging" you bet, I wouldn't be here if it were not. Sometimes my only regret is I didn't discover bullseye until after I retired about 4 years ago. My challenge is to make a higher class and I'm having fun doing it.
Thank you and all in this forum
Stan

What a fantastic thread! And thanks for the pointer to Shooting Sports USA. I just found their calendar of coming events, and it's very helpful: https://www.ssusa.org/coming-events/

Informative and a good read. Unfortunately, bullseye target matches are not available in British Columbia, Canada

Does anyone know of any YouTube videos that shows what Bullseye shooting is all about similar to this explanation?