How to practice when away from home - one idea

How to practice when away from home - one idea

I do a lot of volunteer work at Aravind Eye Hospital in India.  While there, I've always been thinking about shooting, and recently Bullseye shooting.  The idea of taking anything resembling a gun here is not very wise for an infinite number of reasons.  But, I needed something to simulate a 1911 so I could get the refraction done for my new shooting glasses, which is why I put together the mock-up you see below.

I had a feeling my right arm strength was draining away, and last week I had this crazy idea of how to stay in shape - hold a water bottle out in front of me, and do Keith Sanderson's holding drill.  Boring, and so much was missing.

So, I removed part of the business card I used for the vision tests, and held the gizmo up in front of me.  Way too light, but better than nothing.  I thunk about putting something in or on it to gain weight, and then the idea of coins popped up.  So, every day I've been adding coins.  Then I wanted something to "aim with", so I taped a toothpick in place.  Worked fine, but it was too far to the right, so I added another more or less in-line with the "gun".  This led to the idea of using electrical tape to make a "rear sight".  (It's not obvious from the photo, but the business card at the end is bent 90 degrees to the left, so the toothpick at the left is in line with the center of the phone case, er, gun.)

I was right about my strength draining away - at first the silly thing wouldn't hold steady (easier to blame it, than me), but after a day or two, it was getting stable.  I also noticed that before I added any weight at all, every time my heart beat, the business card "fluttered".  As I keep adding weight (coins) the thing is getting more stable.

The tape at the bottom keeps the "flap" from opening, which would allow all the coins to fall out.  As of today, there are roughly 200 Rupees worth of coins in it so far, or about US $3.  At some point I need to start taping coins to the "barrel".  If I was back home, I'd probably use nickels or pennies.

I doubt if the TSA would care one way or another about this thing.  It doesn't look like, well, anything.  Not sure what I would say about it if asked - I need to think of some alternate purpose.

Is it working?  Yes!  It won't help me with trigger control, but holding the "gun" out in front of me has to be good, and keeping the "sights" lined up - ditto.  For those of you who told me how clear the front sight must appear - using a toothpick is great, as with my new glasses, I can see all sorts of detail on the large end.  It's knurled, and has splinters, and all that detail is now perfectly clear. 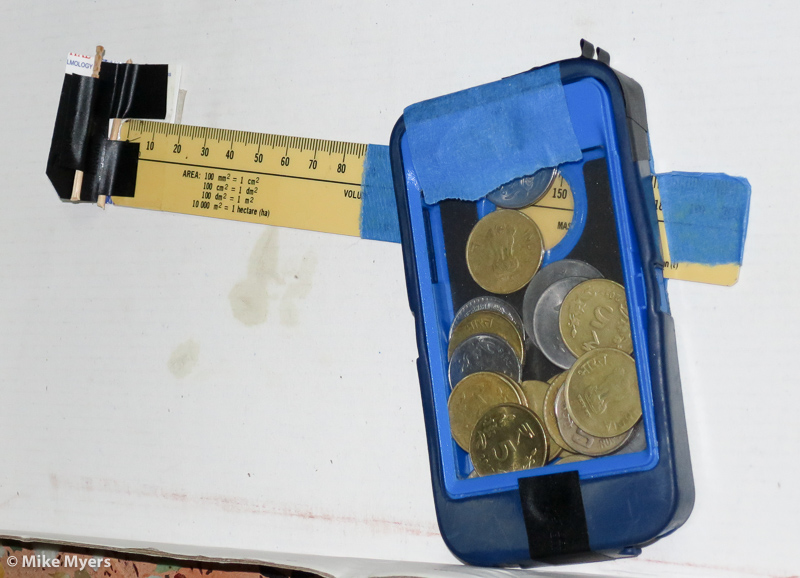 I have used the Prohands heavy tension Grip Master (prohands.net) for practice at work to simulate my gripping a 1911.

Nice. I've used water bottles or jugs, but the addition of the sights is a really nice touch.

When I travel I use visualization, with or without .mp3 commands to practice.

Similar topics
» Air pistol for Home Practice?
» I have no idea how I did this.
» Brainstorming an idea
» Olympic pistol exemption in NYS
» DIY Snap Caps