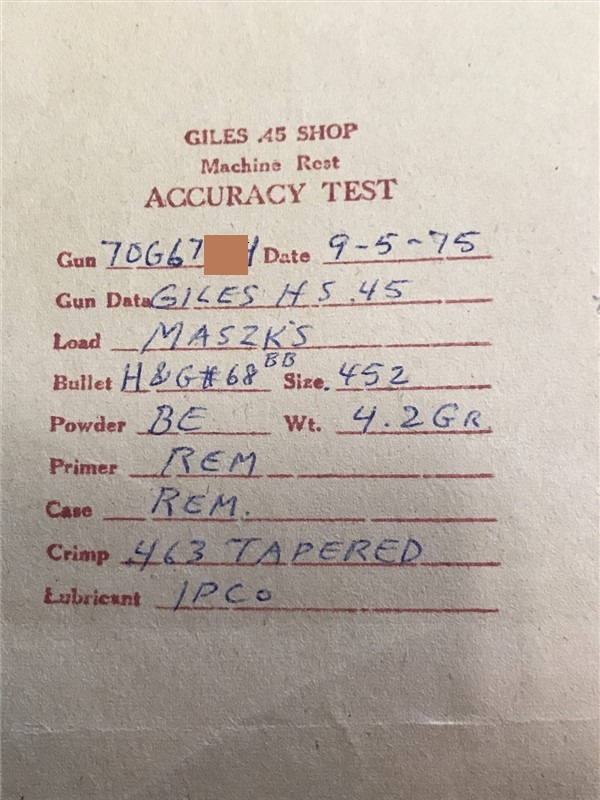 This is the target from my Giles pictured in the sight rail thread. 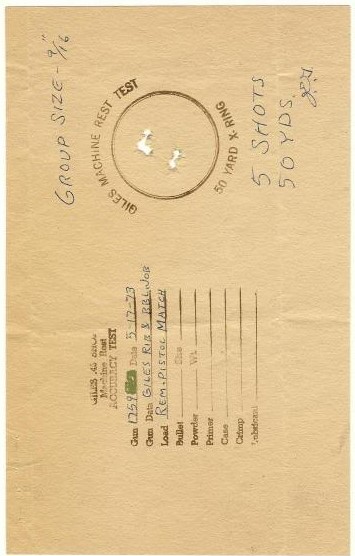 
From In My Experience
Dec 1992 American Rifleman

Editor:
In my gunsmithing days ('51-'83) I specialized in target pistols, primarily .45s. Early on I would get customer complaints where the gun failed to go completely into battery, i.e. the slide did not go all the way forward. Nearly always the cause was a reload with a short case.

The case had been flared to receive the bullet and the standard roll crimp did not quite remove the flare. Or alternatively, the customer believed the case should not be crimped at all and the roll crimp failed to straighten the flare which would hang up in the taper of the .45 chamber. The answer, of course, was to sort the cases carefully, eliminating the short ones. As usual, not everyone wanted to bother.

Another disadvantage of the roll crimp was that the degree of crimp varied directly with the length of the case. Long case, hard crimp - short case, no crimp. This caused not only malfunction but inaccuracy as well. Since I test fired every gun at least 100 rounds and guaranteed a specific level of accuracy. I looked for a way to avoid trimming all cases to a standard length. But I could not afford to discard the short ones.

My previous toolmaking and inventing experience led me to the tapered crimp. It requires a separate operation, of course, but has several advantages over the roll crimp.

Another was that cases lasted a lot longer before splitting. The taper crimp did not “work“ case mouth brass as severely as the roll crimp. Crimp-caused malfunctions were eliminated.

The taper crimp also prevented telescoping, where the bullet slides back in the case when it hits the loading ramp.

Finally I seldom had to discard a case because it was short. So what kind of accuracy are we talking about for these taper crimped reloads? First a bit more history.

It soon became apparent that my time would be better spent if I bought reloads even though I had two Star reloaders. Fortunately, I knew a few really capable reloaders. Gene Wilson and Joe Maszk come to mind. Frank Shuster was a top bullet caster also. Joe Mazak loaded sample quantities of those good bullets with powder charges from 3.3 to 4.4 grs. of Bullseye, taper crimped to about .463” at the case mouth gave the best accuracy. Cases were all one kind and loaded on Joe's Star machine. Seldom did I see factory ammo that would shoot as well, and when I did, the military guys had it.

And the numbers? Well, I made more than 4,000 target .45s over the years and must certainly have fired at least half a million taper crimped .45 reloads. I guaranteed each .45 capable of shooting five shots into 1-3/4 in at 50 yds. and fired an average 1-1/4 in test group. My personal best from a Colt .45 was 5 shots in .39 in. at 50 yds. And I had a fair number of groups at sub in. Under 1 in. was not uncommon at all. I didn't always send the best test group with the pistol but I did always include loading data. I designed a taper crimper for the Star machine so there was no extra operation. Ernest Whalen of Heatbath Corp. made and marketed the taper crimper for a number of years, paying a small royalty for use of my design.

My customers had most of the above info. Guess I should have made it available to all handgunners. But I tend to put things off, like trimming cases, for instance.

Wow, this brings back a lot of good memories. When I first started in bullseye pistol shooting in the early '70's , Maszk's Workshop in Bunnell, Florida was my favorite place to hang out and see new Giles pistols, as well as, other hard to get guns. I never could afford any of those guns back then, but always liked going there and drooling. Joe Maszk specialized in target pistols and police equipment/ firearms. I saw my first S&W model 60 (highly polished) there. Another favorite shop to browse was Buck's Gun Rack in Daytona Beach. Back then, there were a multitude of great gun shops in central Florida.