What grips do you guys use on your revolvers? My 686 came with factory rubber/plastic black grips and they just don't work for me. Any recommendations? 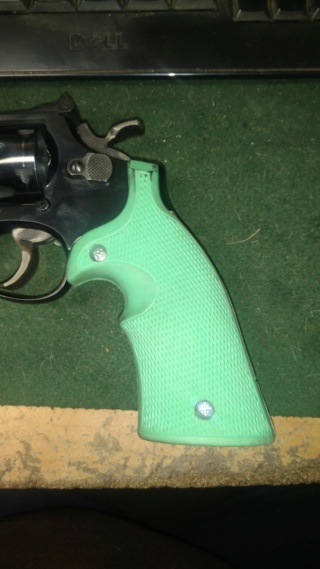 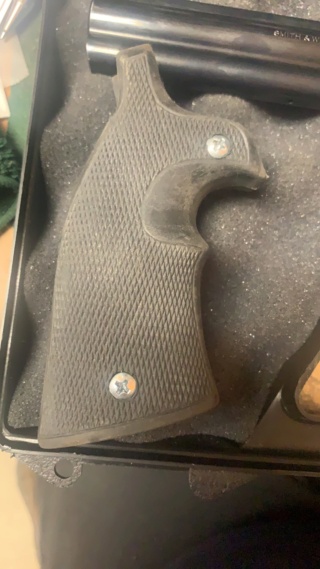 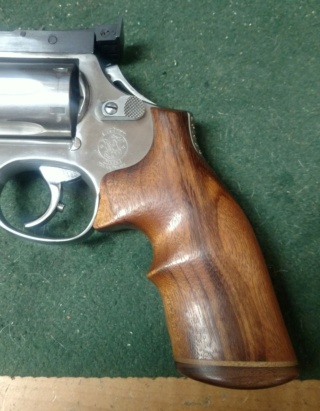 Jim, what grips are those please?  Does the checkering cover the entire back of the grip?   Are you happy with them?

I am also using the Bill Davis grips. I bought a used revolver with them and then mysteriously they were on a half dozen!!

I have several different grips but the Bill Davis are the ones I go back to. I shoot 290’s at 50 feet. The rapid stage is where this grip really works. I can get all 5 shots single action....with time to spare....not with a Houge or several others I have.

In the past, I have been told numerous times to grip a gun as high as possible, so you're supporting the gun close to the axis of the bullet firing, which give you the most control.  Made sense when I was told to do so, and still makes sense today.

I've got several revolvers - the specific one I'm asking about now is a Model 17-5 .22 6" revolver, but I'm hoping there is one answer for all revolvers.

It's been a struggle, but I think the gun is now set up properly, and sighted in for sub-6-o'clock hold.  (I couldn't adjust the sights for center hold, as the adjusting screw bottomed out, same problem as I had on my Model 14.)

On to my question - there didn't seem to be any way for me to grip the gun securely - the stock grips were just too small for my hands.  I went through all my "stuff" and found a set of "S&W target grips", which are larger around, especially lower down.  Now I can get a good grip on the gun


With the target grips, as long as I grip lower down, I can shoot it reasonably well.  I found I did best when I gripped the gun harder, but not so tight that the gun shook.


If I should grip the gun high up on the stocks, I need to get new grips - I see several interesting choices up above.  I had a similar issue before on my Model 14, but I solved that by stealing the Nils grips from my Model 17 to put on the Model 14.

Option #1 for me is to spend $200 or so on another pair of Nils grips, identical to my first set.  I like that, as both guns will use the same grips.  LenV gave me some other options if I didn't want to spend that much.

Option #2 is to leave the S&W Target Grips in place, and grip the gun lower so I get a good grip on the gun.

Logically, it doesn't seem to make that big a difference how high my hand grips the gun for a .22 revolver.

Those factory S&W Target stocks are suited to guys with big mitts.

The way they're tapered, they can fit almost anyone (maybe not LenV) depending on how high on the grip you place your hand.

Funny, I completely forgot how I used to grip a revolver with two hands - nothing feels "comfortable", as if the revolver was specifically intended for one hand shooting.

The only useful thing my left hand can do, is support the weight, but it feels like it's just getting in the way.  That, and thanks to this forum, I shoot much better with my left hand in my pocket.  Years ago, I'd never have accepted that.

I can tell you that when I'm considering purchasing a revolver the very first accessory is whether I can get Nills that fit it.  If I can't the 90%+ of the time I won't purchase the gun, Nills are that impressive...

Steve B, interesting....    I already own a pair of grips with finger grooves as shown below.  They came on my Model 17, but I moved them to my Model 14.

If I get another set, I think I would like the thumb-rest, as shown in the second photo.  I assume it will work like the thumb rest on my High Standard, where the opening is in the grip, and my thumb goes there, with no real pressure being put on the gun.

Have you tried both, and if so, which do you prefer?
I'd also ask LenV, but his hand size is much larger than mine. 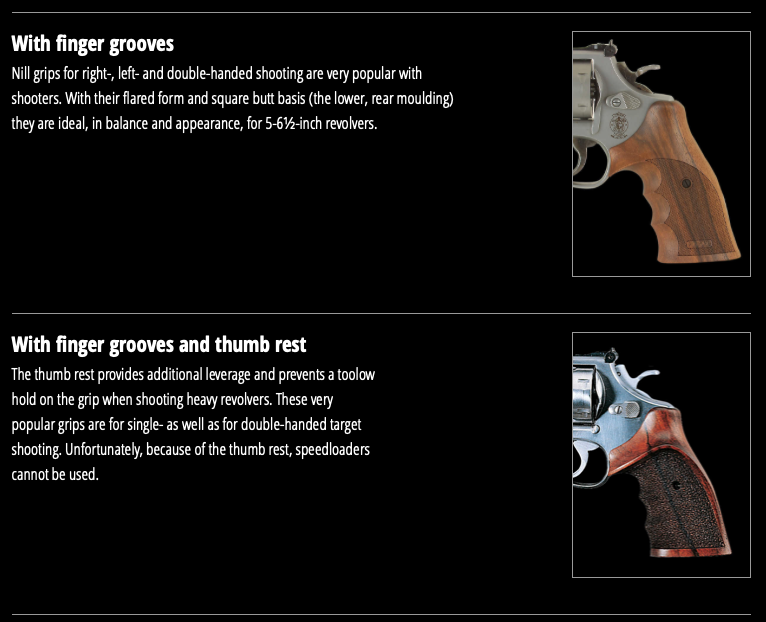 If it all works out, I now have a set of the grips with finger grooves, but no thumb rest.
They were in stock at Dominion Hobby.  Supposedly they'll be shipped on Monday.
https://dominionhobby.com/product/sw046phg8-sw-k-l-frame-square-butt/

LenV, you suggested how I could save a lot of money, thank you, but if I get anything else, I'll likely be sorry I didn't the the Nill grips to begin with.

I got to try a set of "Ergonomic Grips" on a Ruger Mk IV yesterday at the range.  They seemed to fit me pretty well, but I might have opened the width at the bottom slightly.  They automatically put my hand in a  certain position, but I'm not convinced that is the position I would have preferred.  I like that the gun+ergonomic-grip became more like an "extension" of my arm/hand, but I don't like the concept that this is locked in place, forever.

I never would have gotten grips with finger grooves.  However, the first pair of Nils has them, and they made everything feel much better.  The proof, one way or another, will be at the range.

The stock S&W grips felt too tiny for me to control the gun.  The S&W Target Grips are fine, if I put my hand at an appropriate height on the grips.  The Nils fit my hand perfectly, and everything just "worked".

mikemyers wrote:Steve B, interesting....    I already own a pair of grips with finger grooves as shown below.  They came on my Model 17, but I moved them to my Model 14.

If I get another set, I think I would like the thumb-rest, as shown in the second photo.  I assume it will work like the thumb rest on my High Standard, where the opening is in the grip, and my thumb goes there, with no real pressure being put on the gun.

Have you tried both, and if so, which do you prefer?
I'd also ask LenV, but his hand size is much larger than mine.

I've had both, with and without thumb rest.  I tend to prefer symmetrical grips for shooting with either hand.
But the stippling texture is greatly preferred over their Rhomlas checkering pattern, it just feels good...

Recommendation for a source for Nill Grips

This is the first time I've heard of another US distributor for Nill grips.  When you get them post a photo and your thoughts.

I've bought from Domino Hobby. Easy to work with. A lot of their grips on GunBroker.

Steve B wrote:........This is the first time I've heard of another US distributor for Nill grips.  When you get them post a photo and your thoughts......

Sure, will do.  They should be here by Friday.
Great people to work with - I didn't expect to hear from them until Monday, but Pat answered my questions an hour or so after I sent the message on Sunday.  I created an account, and ordered the grips.

I'll take a photo once they arrive.  I hope to use them this coming weekend.

They did their own website - so much easier for me to use than the official Nill Grips website.  It took me only a minute to find what I wanted, and it said there was one in stock.

Steve B wrote:..........This is the first time I've heard of another US distributor for Nill grips.  When you get them post a photo and your thoughts.......

They arrived today.  Everything I expected, and more.  When I took them out of the box, they looked like a single piece of wood.  The instructions explain how to separate them, and which one goes on the gun first.  There's a locating pin which mates them perfectly together, and it was a very snug fit to get them onto my Model 14 frame.  I tightened the screw, then pushed the wood together at top and bottom, and the screw went a little further.

I feel rather confused about grips.  There must be a reason why S&W makes grips the way they do, but even with "Target Grips", as I move my hand higher or lower, the effective "grip size" changes.  When I start shooting, my hand doesn't always end up in the same position as when I started.  With the Nill grips, it "feels" like the grips are the same size all over - when holding the gun, it doesn't "feel" like I'm holding anything - it's as if the grips "plugged into my body and became part of it".  I read long ago the finger notches aren't a good idea, but I must be lucky - my hands fit these perfectly.   ......which means they probably wouldn't work for LenV ?

Dry-firing the 17 was getting pretty good, I got to where the gun "mostly" stayed where I wanted it.  With the Nill Grips, the gun feels "locked in place".  I've learned how important that is, as if the interface between the gun and my hand changes, so does the location of the holes, just like with a Bullseye gun.

The textured finish feels great for me, but I've read where some people prefer a more traditional way of doing this.

I'm not sure what else to say - these are the only two S&W revolvers I plan to buy these grips for, as even on sale, they're expensive.  I also ordered a set for a 1980 Python that followed me home, which has grips that feel as "loose" as the S&W grips - maybe more so.  It's time for me to put a few things up for sale here I guess.

If it doesn't rain tomorrow, maybe I'll get a chance to try them out at the range - but I already know how they feel, as this pair is the same as the pair that came with this gun, which I moved to my Model 14.  Here's a photo: 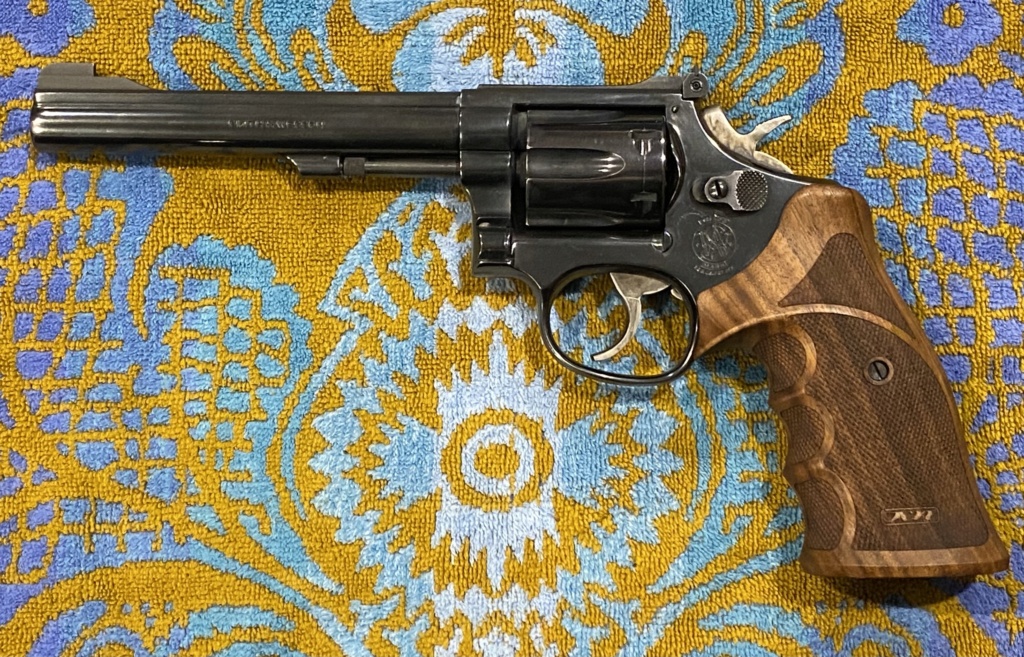