I'm trying to define the parameters for a custom grip and one dimension requested is grip angle.

I have Rink "upright" Walther GSP grips on my Pardini's that look like this:- 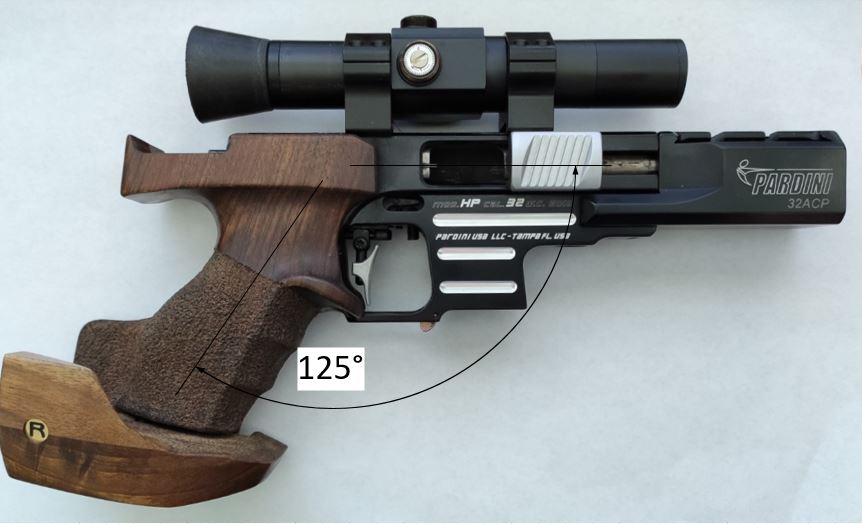 And (currently) standard Morini MatchGun grips on my MG2 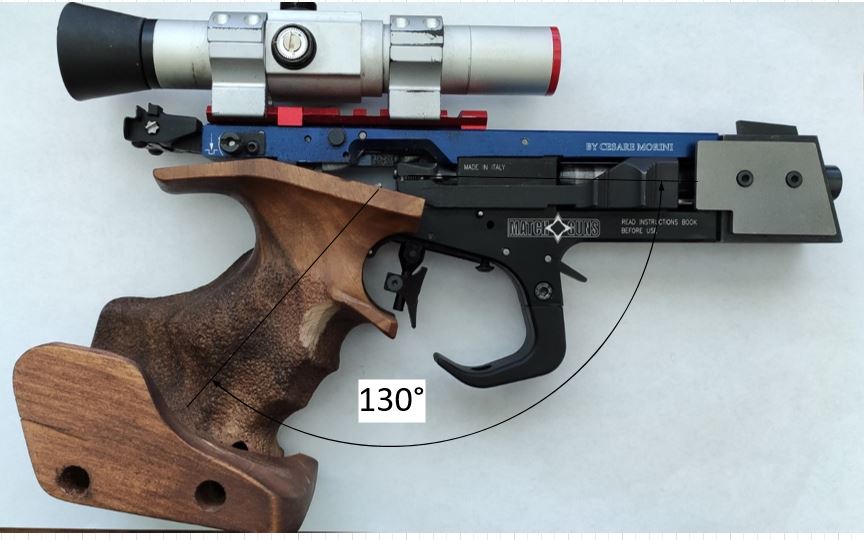 I put the carefully framed photos into a drawing program and added the angle markers, I was surprised to find that the angle appears to be only 5deg different between the two grips. To me, the MG2 grip is much more inclined (Euro ISSF style) than the custom Rink grip on my HP32. It feels totally different.

Am I measuring incorrectly? Or does just 5deg make such a big much difference?

Just looking at the upper edge of the trigger finger cutout in the grip, you can see that the MG grip overall carving would seem to create a greater tilt at the wrist joint once your hand was gripping it, in addition to the 5° angle.

It seems you could about put your hand straight into the Rink, but would have to angle down and in to get into the MG grip.

Presetting some extra angle into the wrist is probably creating that extra angled feel.

There may be differences in the angles of the grip base plates to the frame and grip body as well.

You know the MG angle is adjustable...right?

When you say adjustable - I understand that the retaining fixture can pivot - I have tried several times to increase the steepness of the MG grip, but have not been able to achieve any significant change. Is there a trick to it?

Thank you TomH_pa, you just inspired me to take another look at my MG2 - I vaguely remember someone mentioning about having to use wedges to get more extreme grip positions. I fiddled a bit and then realised that the trigger bar was obstructing the grip from rotating "forward" to a more steep position. A quick whiz with a dremel sanding wheel and a suitable recess was cut:- 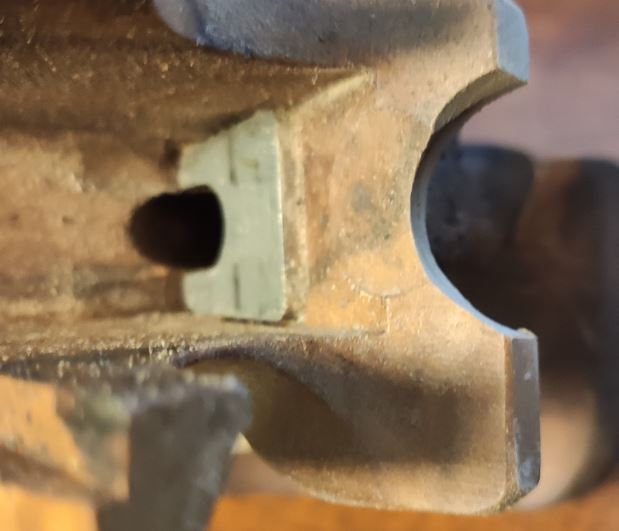 Then I had to insert a strip of wood between the frame and the top of the grip to restrain it from rotating as you tighten the grip bolt. 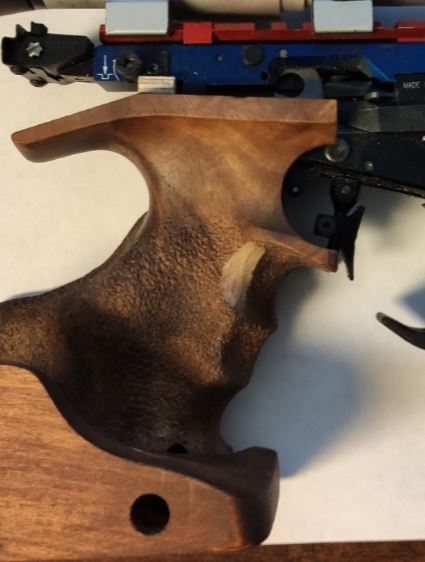 Only issue now is that the slide catches the grip because I have rotated it beyond the standard dado cuts in the top inside edges of the grip - I can fix that easily tomorrow.

Need to test it first, but TomH - thanks - you might have saved me several hundred (more) dollars on grips that don't fit - Yay!

radjag wrote:When you say adjustable - I understand that the retaining fixture can pivot - I have tried several times to increase the steepness of the MG grip, but have not been able to achieve any significant change. Is there a trick to it

Are you asking for adjustments beyond that what are provided in the design of the gun and grip mounting adjustment screws? Not sure what the pivoting retaining fixture is. I know it's stating the obvious...but the adjustment screws on the frame will change both the X and Y axis angles on the grip to the designed limits. See attached from the manual...

radjag
There should be 2 small screws (5mm I think) in the back of the frame near the top of the grip that can be screwed out so the grip will stay at the elevated angle. You can see them in the side view of the parts diagram Tony posted. The adjustment is somewhat limited but you can add a shim inside the grip and the screw will hold it in place once the grip mounting screw is tightened

I had to do the same thing with relieving the upper area of the grip. I should've mentioned that. Glad it worked for you.

I would guess the grip angle should be measured along your knuckles while gripping. Your reference line may appear ok but not represent what's going on.

Yes, I was aware of the lateral screws on the frame and have adjusted them previously with other grips I've tried, but I have not used the OEM Morini grip since I first got the MG2 mid-last year and had never previously looked really carefully at what was limiting the free movement of the grip. Those adjustment screws are useful for fixing the "windage" position of the grip, but cease to function well to hold the "elevation" of the grip at more extreme angles. The key issue for me is clearance for the trigger bar. I have shortish fingers and so the trigger is set close to the rearmost position. It needed about a 10mm notch to be cut into the grip to give sufficient clearance.

The angle which I have the grip set at now is surely somewhat beyond the original design intention of MG, but, as far as I can tell, as long as there is sufficient clearance for the trigger mechanism and the slide movement, there does not appear to be any technical reason why the gun should not be used with the grip at this angle.

I will try it first, if all good, then I will make a stack of removable shims so that I can adjust the angle to my preference and lock the grip into place securely.

Mid-last year when I got both the MG2 and the Pardini's I had set my mind on fitting identical Rink grips to all three, but none of the initial order worked out well for me. I have a Rink grip for a Walther GSP which came to me on an old gun I bought a few years ago (I sold that gun and the Buyer did not want the grip). That grip fits me perfectly and is my "template" for subsequent grips. I was eventually able to order different spec grips from Rink for the Pardini's and I'm happy with the ones now fitted, but Rink would not supply a duplicate for the MG. The original question in this thread arose because I have been talking with Kang Chua of MG about ordering custom grips from MG.

Now, with the helpful comments and advice given by contributors to this thread, I hope that I will not need a custom MG grip. Yay!

I have read and heard people talk about grip angles and they are talking about 17° or 18°. Why are
target pistol angles defined from the horizontal and other pistols are measured as they relate to the vertical ?