I am trying to test some different loads in my Colt Officers Model Match 38 Special revolver. I don't understand why, but when ever I bench rest iron sighted pistols things get really screwy for me. I lose focus on the front sight and it tends to sit just proud of the rear sight. I think it might come from how I'm set up behind the gun. I'm usually higher than the gun so I'm leaning way down forward to bring my eye in line with the sights as the gun is rested on the bench.

I don't own a ransom rest.. I have a pistol rest I feel confident that it'll give me the results I seek but I feel my issues stem from myself not the equipment. I don't get great groups. I get clusters. From there I have to look at a few chosen shots and try to determine if things are working or not. I'd like it if I could just get groups. Even the best looking group wasn't great or what I was really seeking. I've tried sand bags but I just burn em up with a revolver.

What are your experiences bench rest testing revolvers? What works for you?

2 handed bench might require  a different script for glasses to focus front/rear sight.

Have you thought about a temporary scope mount which does not require any drilling or permanent mod's to the gun - maybe like this:-
https://www.ebay.com/itm/Colt-Python-etc-Revolver-Scope-Accessory-Mount-Base-SATIN-BLACK-/311824118803

Then put a cheap scope sight on it. I found a 4-7x long eye relief scope including mounts for about $30, but don't recall where. It has a 1" tube diameter and just drops straight in place of the UD sights on my target pistols without disturbing zero.

I'm also very inexperienced with bench resting. I'm currently using a Caldwell Pistolero rest
https://www.amazon.com/Caldwell-Pistolero-Adjustable-Ambidextrous-Shooting
which works OK for me. Rest on the bench and me sitting in a plastic garden chair. Two handed.

radjag wrote:Have you thought about a temporary scope mount which does not require any drilling or permanent mod's to the gun - maybe like this:-
https://www.ebay.com/itm/Colt-Python-etc-Revolver-Scope-Accessory-Mount-Base-SATIN-BLACK-/311824118803

Then put a cheap scope sight on it. I found a 4-7x long eye relief scope including mounts for about $30, but don't recall where. It has a 1" tube diameter and just drops straight in place of the UD sights on my target pistols without disturbing zero.

I'm also very inexperienced with bench resting. I'm currently using a Caldwell Pistolero rest
https://www.amazon.com/Caldwell-Pistolero-Adjustable-Ambidextrous-Shooting
which works OK for me. Rest on the bench and me sitting in a plastic garden chair. Two handed.

I like the idea o temporarily using an optic. I feel that would help a lot but I will need to research a good mount that doesn't permanently alter the gun. The one you suggested uses only one screw it seems... how will that keep the scope and mount solid enough to test with I wonder..

Thanks for the input. Something to think on.

Make a solid arm support table thing about as high as regular standing arm height.  Make it comfortable and effective.

Rest both arms on it with the front edge at the wrists of a solid two hand grip.  Keep your eye glued to the front sight and exercise the best sight alignment and trigger control you can.

I have shot the 1955 Model and the 38 OMM quite well this way.  But a very few times when my head was screwed on just right, off hand groups were even better.

I modify Jacks approach. I shoot sitting but I use enough sand bags so my head and arm are in my natural stance. It also keeps my head up. Bending forward really messes up a sight picture on steel sights and ruins the parallax even on great scopes.

Sandbags supporting the wrists and forearms, not the gun. Call the shots as you would shooting offhand. If the shots are on call, all is good.

Since I've read radjag's response I've been researching equipment options for a scope and scope mount for the Colt Officers Model Match and I've come up with a plan. I've found some used equipment online. In a week or so when my shopping list comes in I'll put a picture of the Colt's new outfit. The saying "old school cool" comes to mind.

two hand hold I used this week with a S&W 586 just put a UD 1" on it with elbows on the bench and stretched out then pull trigger straight back will hold the X ring at 25 yards after dial in , shoots right where you point it
at least I know the load is good now if I could hold that steady in a match what marry world it would be!

Jason, I use my pistol box and a couple a shot bags and have another wooden box in case I need it to bring the sights up to my eyes. Then I hold the gun like Ralph does.
Stan

Jason: YOU are a Ranson Rest, why not just shoot it a see how it goes?

bruce martindale wrote:Jason: YOU are a Ranson Rest, why not just shoot it a see how it goes?

Ha ha, thanks but I don't want to spend a lot of time and money on ammunition components wondering if my target was the best I could do with that ammunition, or if I was having an off day and perhaps I could do better.

I very much miss my old home in TN where I had the ability to shoot on my own property. I could load ammunition, then immediately test it out the back door of the shop. If it didn't work out too good, I would go back to the loading bench, make some adjustments, and test again. I could get some feed back and load work done all in a day. Right now I have to wait to visit the range due to covid and what range time I do have I need to focus on training.

When it comes to bench testing guns, rifles are easy enough for me. Pistols with red dots are easy enough too. Handgun ammunition intended for short distance work is simple no matter the sight system. But iron sights, on a revolver... Lord help me. I can't shoot a revolver with irons off a bench to save my soul. So I have scope mounts and a scope on the way.

I was reading this thread, trying to figure out why I'm struggling to bench test a S&W Model 17 revolver.  I have a heavy-duty steel device that supports my gun, my arms, and everything else.  Maybe I'll get to try it Monday, but it takes up most of the trunk of my Mazda MX-5.

I bought one of these, but it flops all over, and I think I shoot better just holding the gun with two hands and shooting: 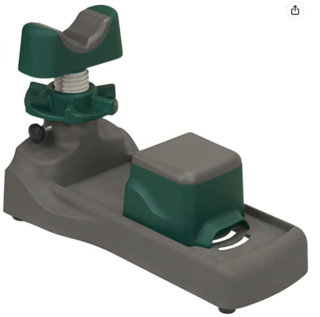 I gave up on it, and tried out this, with a v-shaped sandbag on top: 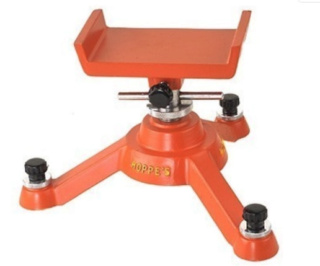 This did a great job of supporting the barrel.  I'm not sure what I'm supposed to use to support the back of the gun.  I tried just holding the gun while the barrel was resting on the rest, aligning the sights as best I could, and carefully shooting.  I got this result: 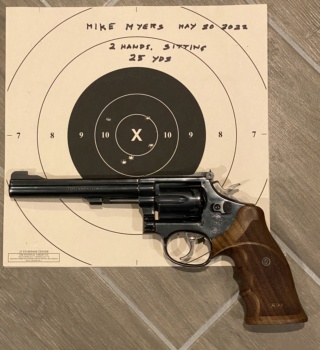 I have no idea how "good" this is.  It's at 25 yards, and maybe it really does represent what my gun is capable of, but since all I'm using for aiming is the open sights, maybe the gun is much better than this?

There was an idea that was discussed earlier of temporarily mounting a red dot sight on the revolver, which would be great if it was possible, but how????    Maybe someone makes a revolver mount that can somehow be fitted to the revolver instead of the rear sight?

Not temporary. I mounted a Sightron on my 17-4. I will take pictures of my group this weekend. Scopes are easy to mount on revolvers. 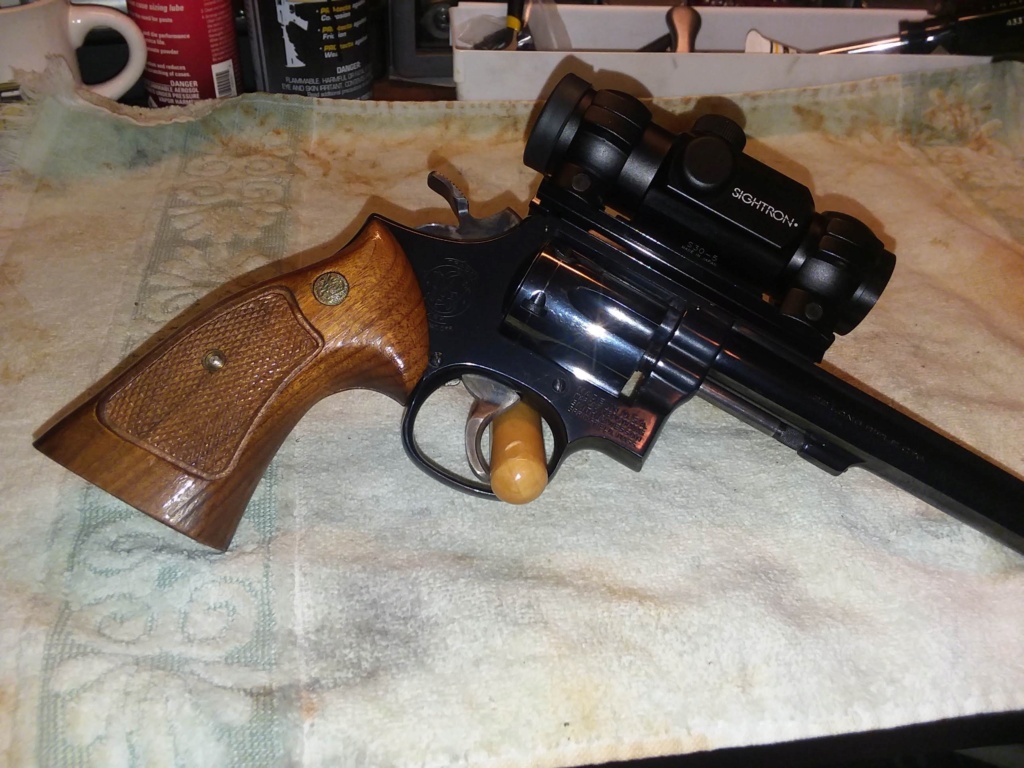