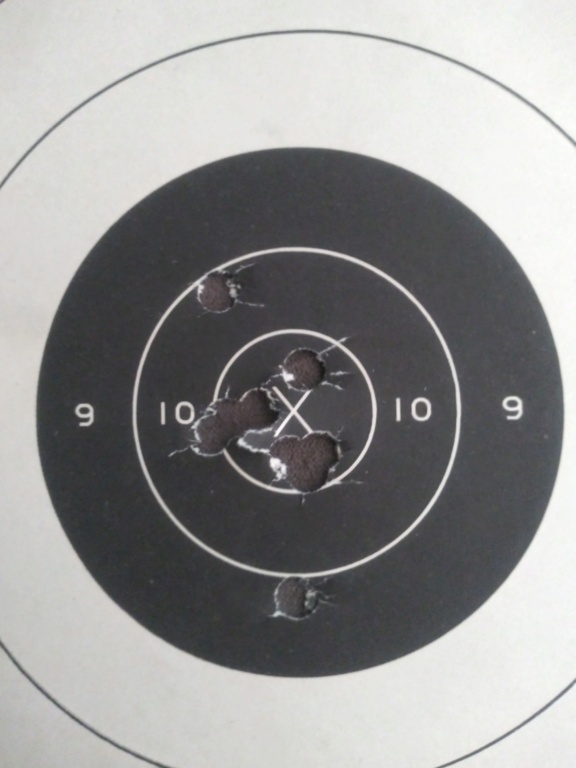 I'm not sure it matters that much. My testing centered on the 180 and 200 gr. bullets from both summers and Brazos. All were coated HiTek. Both will shoot fine at the long line. I did find with my pistol that BE worked much better at the long line and not with the lightest possible loads. On my slide mounted dot pistol 3.5 worked very well with the 180. Something 3.1 - 3.5 should be good. For the short line pretty much whatever functions reliably will clean a target. I prefer the recoil impulse of WST. 3.3 - 3.6 works there.. i look forward to shooting mine this year at our matches..

Nopro wrote:  I have a 13 twist build on order. I need to order some bullets. Should I go with a 180 Summers flat base lswc or something else? After all these experiments is there a consensus on what the best load is for a 1 in 13 twist barrel?

"Best" depends on what you want . If you're planning on a LSWC , I assume you're having a wad gun built , probably with a dot sight. Frame mount or slide mount will make a difference. People perceive recoil differently , personally , I like the feel of the 200gr bullet, it gives a gentle shove, slowly. Some people say it feels too sluggish. Some people like the 160s , I feel like they're too snappy. The good news is that the barrels seem to shoot just about everything well. I had best results with BE and WST , just about every load tried was inside the 10 ring , with no attempt to optimize loads , just standard seating depth, components , etc. The only thing I did was crimp a little tighter than usual , thinking it might help with the light powder charges used . I'll test that theory later when temperatures rise. Have fun and good luck , Richard

Thanks for the responses. I am having a wad gun built with a slide mount for a red dot. Is there much of a difference in recoil between a 180 and a 185 gr bullet? It seems like it would be minimal at best. Also, what's the advantage to a flat base bullet over a bevel base?

Nopro wrote:Thanks for the responses. I am having a wad gun built with a slide mount for a red dot. Is there much of a difference in recoil between a 180 and a 185 gr bullet? It seems like it would be minimal at best. Also, what's the advantage to a flat base bullet over a bevel base?

I doubt any human could tell the difference in recoil. Flat base bullets are generally considered more accurate , bevel base easier to load into the case. Be aware when loading different bullets of the bullet protrusion into the case. ie: a Magnus 185 is going to protrude much further into the case than a H&G 68 style bullet that's been reduced to 180 grs by shortening the bearing surface. That will have a much larger effect on powder charge required , recoil, etc. than a mere 5grs difference in bullet weight.