Having fun with the LP50

Having fun with the LP50

My friend Mark is a pretty handy guy. He built a turning target system for our LP50's. This time of year we can go into his warm basement and shoot matches. We can shoot 2700's in less than three hours.

Bill is your son willing to share the STL file for the mag loader?

Ray Dash wrote:Bill is your son willing to share the STL file for the mag loader?

I'm sure he would. I'll have him send it to me.

My son said he plans on uploading it to Thingiverse and will send me the link as soon as he does.

That's great, tell him I said thanks.

Tell him thanks, I will be printing one tonight to try out.

I have found that you will want to widen the opening in the corner where you pour out the excess pellets. I trimmed mine with a utility knife.

Bill - Would you ask Mark if he'd be willing to manufacture and sell a few of the turning target systems?  That is as slick a set up as I've seen!  We are having fun with the LP50's here in MI as well.  Turning targets would be the icing on the cake! 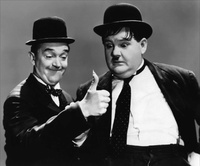 Mark is in the process of making a six station turning target unit. I will end up with the four station. I discussed with him about making these. He talked about how much work is involved. He said if he did it, it would be pricey. I will put the bug in his ear.

croesler,
Like Bill said, I am in the process of building a 6-station version of the system. IBoth are over built with 1/8" plate steel. Uses a cheap RC servo to turn the targets. You can pick up 4 for under $20 on Amazon. Everything else is made from scratch, target holders, etc. The servos are controlled by a Maestro Servo Controller (I use a 6 servo verson $20-$25)). It is programed to sync up with Bulls Eye Voice Commands. I just turn on the Target system on at the same time I start the voice commands. The coolest part is I adjusted the timing so once you start everything, it cycles the turns and voice commands and stays in sync until you stop it. That means I could shoot Timed, Rapid, Timed, Rapid, Timed, Rapid, strings continuously with the 6-target version. Or 3 shooters could shoot Timed and Rapid at the same time

Bill and I shoot at the same time when we shoot.

As far as building you one, I think I will have to pass. As Bill said, it's a lot of work and the price would not be reasonable. Shipping to MI would be ridicules too, 6-station will be well over 50 pounds. With that said, I would be more than happy to help with the knowledge on how to build what I have. It would be fairly simple if you have access to a water jet or computer operated Plasma cutter and a welder.
I have hand sketches and can tell you how I programed and synced everything up. You know, you could build it out of wood as an option...

Let me know if I can help

If not making the Turning Target system.  Plans and component list would be great.  Also develop a place where circuit boards can be made.

I'll see what notes I have and pull together a list of parts, sketches and a few pictures later in the week.
You will not need to make circuit boards, as the Pololu Maestro Servo Controller works great.
Amazon has them for $22. Here are the details on the controller
Pololu - Micro Maestro 6-Channel USB Servo Controller (Assembled)

Wonder what ever happened to Fenton Jones and his Freedom Technologies Target Turner System?

He discontinued the business.

Thanks Tony. Too bad. Had a neat product.

I would like to plug a Turning Target system made by a forum member Slavka001.
I have been using it for over a year and it works great. It works with the Bullseye Match app made by another forum member -TT-. Here is the link to the thread on the forum.

You can buy the system on Amazon or at Slava's shop:

Works like a charm with my LP50 and with the .22  and .45 pistols as well. I even hooked it up to SCATT and can trace my one-shot drills.

Also, a number of folks have used my app and wired up their own systems using devices like the Shelly or Arduino/ESP32, and some servos. Some of them have shared their plans with me, and I'm considering adding their recipes to the app's website, but I need to get some permissions and of course organize it all. It's definitely great to see all these!

As promised a few more details and pictures.
The parts I used are:
Pololu Micro Maestro 6-Channel Controller. $22
Pololu-1350 Micro Maestro 6-Channel USB Servo Controller (Assembled): Home Security Systems: Amazon.com: Industrial & Scientific
You will need as many servos as the bays you plan on using. I used cheap ones from Amazon. 4 cost $22
Amazon.com: [4-Pack] MG996R 55g Metal Gear Torque Digital Servo Motor for Futaba JR RC Helicopter Car Boat Robot : Toys & Games
RC Battery Switch
RC Servo Extensions
Voltage Regulator as I used a 11.1v Lipo battery Pack. I had the switch, regulator and servo leads. All can be purchased pretty cheap.
K-S .062" music wire for the target holders. one 36" piece of wire is needed for each target holder.
3/8" black Delrin for the target holder base. Cut into strips and drilled and tapped for the servo arm and wire target holders.
1/8" plastic sheet for the spacers if you want backer boards to keep dust down. I just use old targets turned backwards.
4-40 and 6-32 button head screws
I had plenty of 1/8" plate steel so I built it out of that material. A little over kill.

I cut out the parts with a Plasma cutter. Drilled and tapped all the holes. and welded it all together
My first 4-bay trap had square holes, but I simplified the build process and just cut 4" round holes with a hole saw on the mill. A drill press would work too. This saved a lot of time. You could do 5" holes, but I used 4" because I already had a 4"-hole saw.
I did not cut the square holes for the servos until last so I could get them centered in front of the 4" holes accurately.
When assembled I ran the wires from the front servo holder into the trap box on the far right. It's behind the steel plate and well protected. I ran the wires in some wire loom to keep everything safe.
The servos are in a 1.5" square tube with a 1/8" plate in front of them to protect them from one of Bill's wild shots

It has a small door on the lower left to allow me to dump out the pellets. The door is held in place with a magnet. It works great. I dump it out once a year as it can hold a lot of pellets.

The sketch below is only a sketch, it is not an actual drawing with accurate measurements so do not use them. It was just a rough draft on Excel to help me visualize what I wanted to build.

Programming the mini-Maestro is fairly simple. Plenty of videos on YouTube explaining that process. I already had the audio file. I had compressed the time between strings using Audacity program as I did not need the long time between strings.
To program the servos, you need to figure out the position of each servo on Edge and Turned Flat to shoot. Once you have that number you just add script commands and then adjust the time in each position to match the voice commands you are using. I slowed the servos speed down slightly. They were really fast, it's possible to shoot sliders now and is very realistic. Lastly, I adjusted the timing so it plays in a loop and stays in sync with the voice commands. This allows it to play in a loop. I can shoot timed and rapid sequence 3 times in a row before scoring the targets. I's great practice.

To operate, I just click the voice commands on my phone and turn on the target system at the same time. Pretty simple to work. I am looking into the possibility of having a controller like a ESP32 controlling both voice and turning on the system.

I'll add pictures, hopefully it helps with how I built it.

Let me know if you have any questions and good luck if you build one. 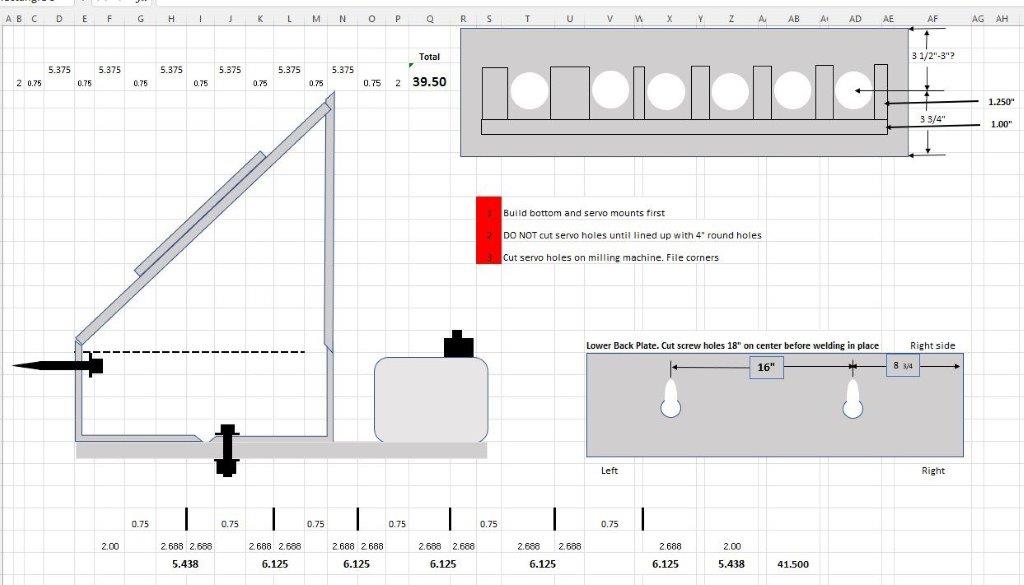 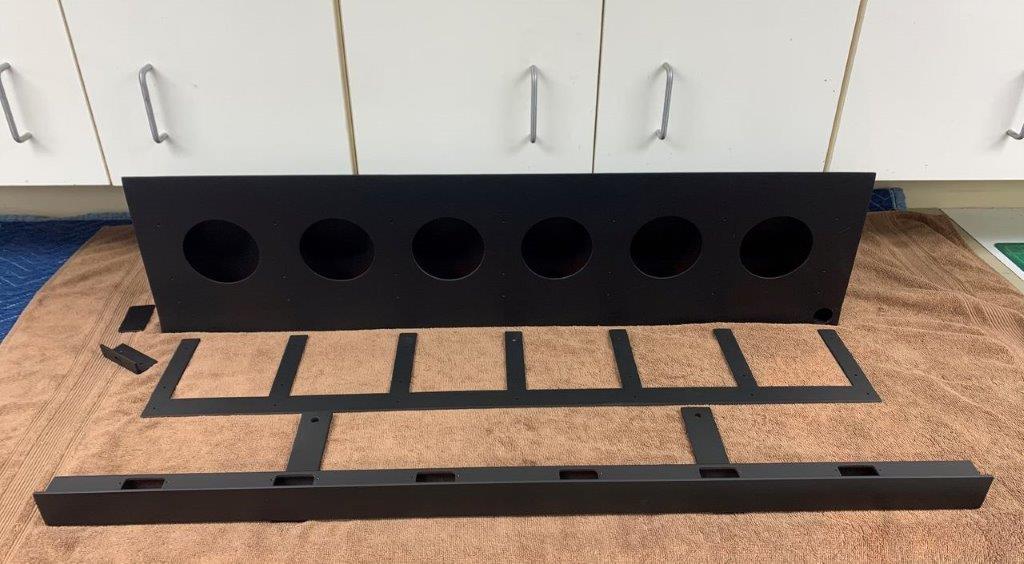 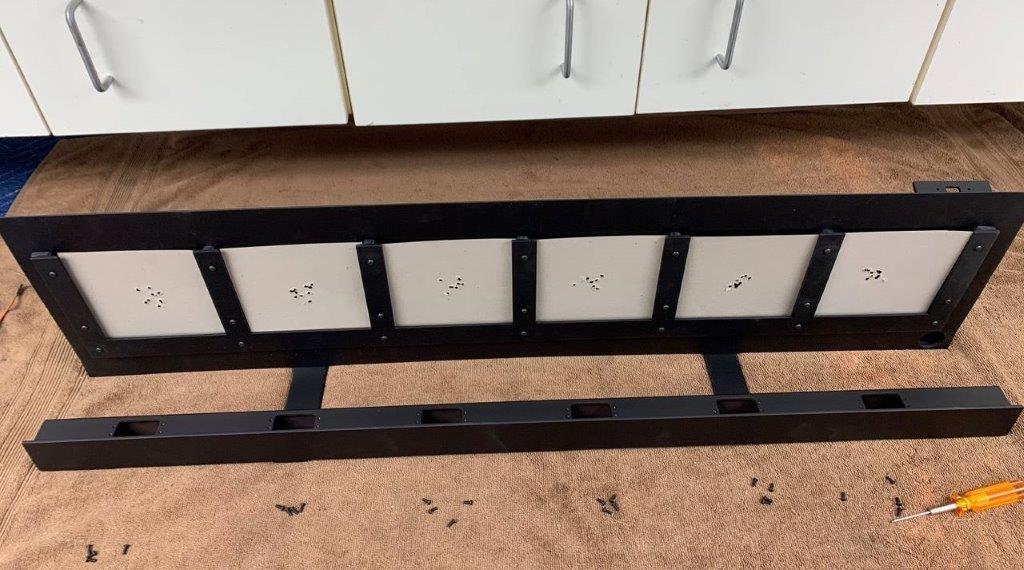 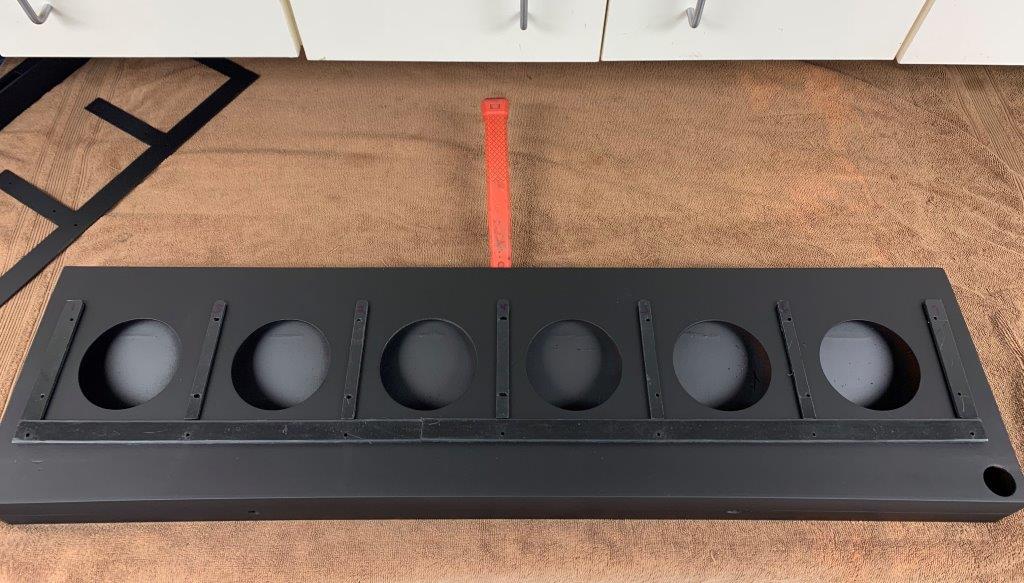 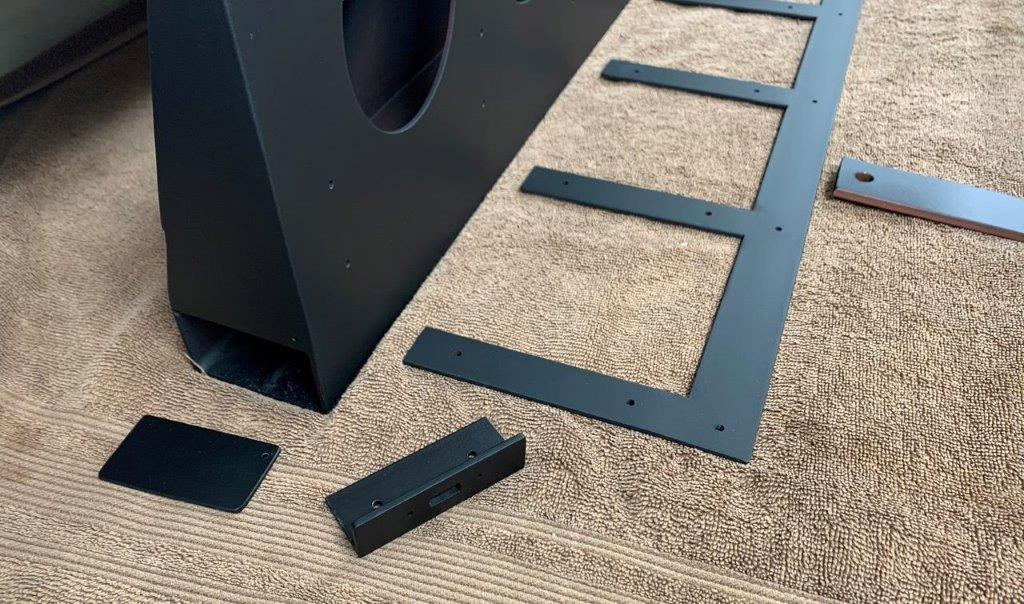 Thanks, some good ideas and a very nice looking implementation. I am envious of the shot also, but that's beside the point.

Is the target holder bolted/screwed to the servo arm with no additional bearings or support? 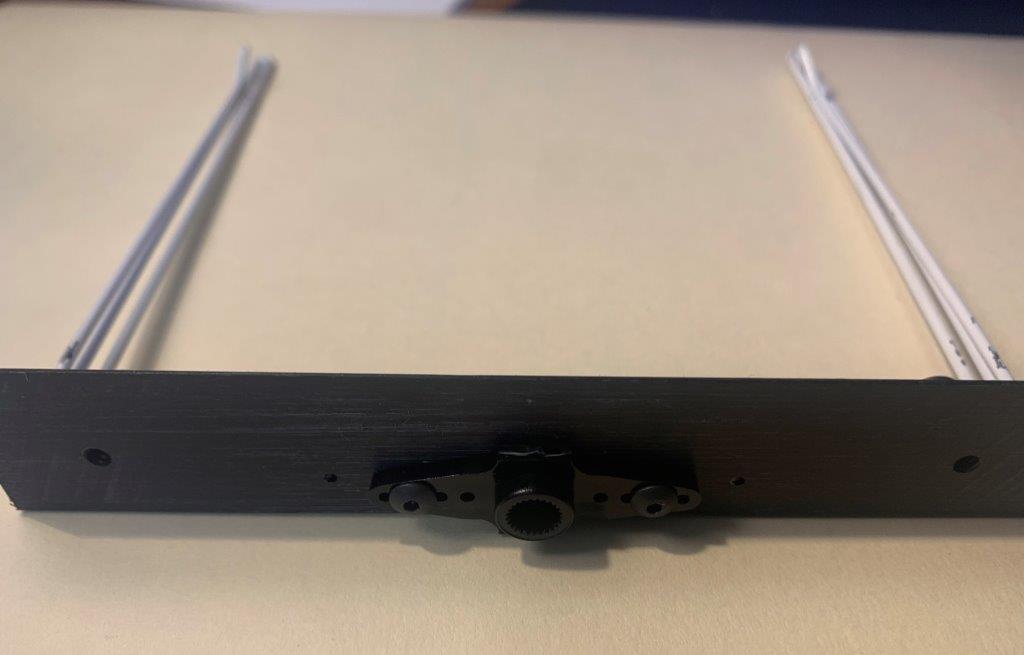 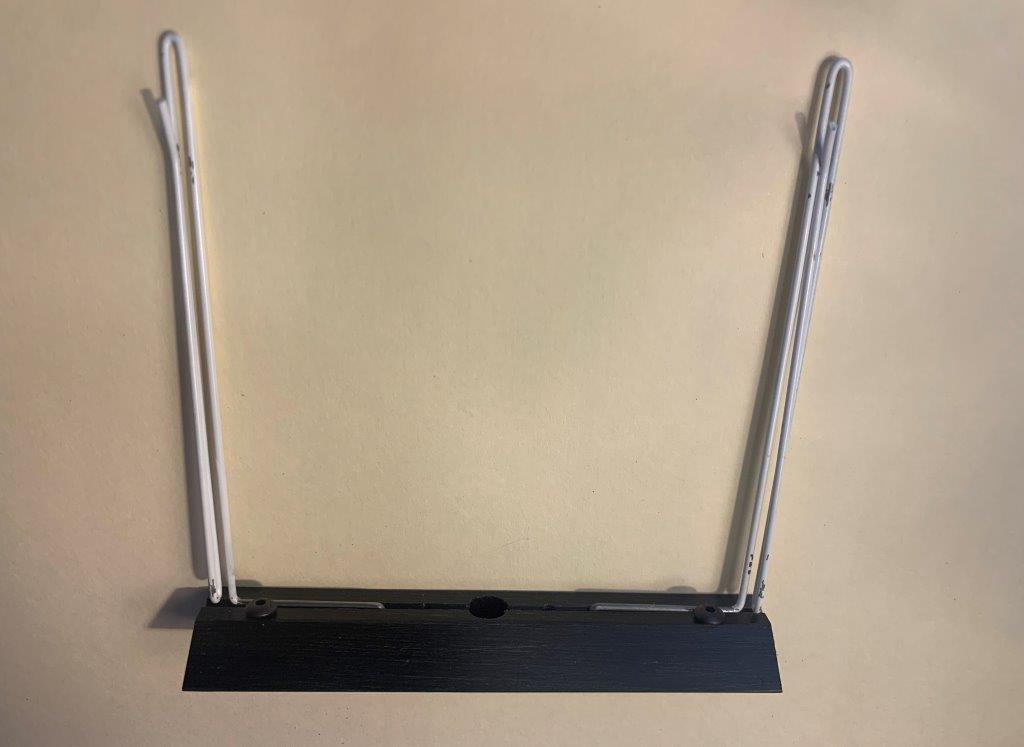 Ive just quickly perused this but if anyone is interested in joining forces to make a few of these as diy kits, I have a 5x10 CNC plasma table and fair amount of fabrication tools. Plasma DOES NOT like small holes so those would need to be punched or drilled.  If someone wants to help out with the electronics end I would look into the metal fab end. If we keep the kits flat and under a certain length they can ship USPS flat rate up to 70# for 20 bucks....about the size of a Monopoly board box.