Fellow forum member, Mike38, sent me 40 Bear Creek 98gr .314 HBWCs to test in my Ransom Rest. I loaded 150 bullets in Lapua brass with 1.6gr of VV310.  40 with the Bear Creek bullets, 40 with bumped Speer Plinkers (using a swaging tool to bump the standard Speer plinker up to .3145 to closely emulate the H&N bullets, and the remainder with the standards Speer bullets. As most are aware, the Speer Plinker is advertised as .314 size, but in reality they run. 3125-313.

The gun I used is a Pardini, with the barrel diameter of .314. The distance was 50 yards, slightly windy conditions. During the first attempt I realized I had a broken extractor causing me to have to manual extract bullets, etc. Handling the gun like this is not good in a RR, so i quit after 20 std Plinkers, and 20 BCs. The Plinkers grouped terribly, the BCs were right at 5” with one 20 round group.

Today I went back with a new extractor. Nice conditions, 65 and sunny, , still a bit windy.  I first shot 30 Plinkers to settle the gun in the RR,  then 10 shot groups with Bumped Speers, BCs and Std Plinkers.

The std Plinkers were surprising terrible, I’ve had excellent results in other pistols, but they have tighter barrels.

The bumped Speers produced groups of 3”. Ive gotten better results othe times, but this was today.

The BCs were a better without me screwing with the feeding, 4” for the first group, 4 1/4” with the 2nd, plus one flier.  Better than the std plinkers, which makes sense since they measure a true ..314, but not as good as the bumped Plinkers.

Hopefully some others will test the BCs as well. Since I already have the swaging tool, I’ll stick with bumping the Speers, but these do seem worth considering.

Back when I was still shooting Bullseye with a Benelli I tried many different bullets/loads and could not get tight groups and had those fliers with the yaw. One night at a match a fellow shooter told me to try seating the bullet slightly below the mouth of the case and put a hefty roll crimp over the top of the bullet, like magic I got consistently tight groups that would hold the X ring. I settled in using a hard cast from a local caster sized at .314 with 1.7 Bullseye or Win 231, either powder grouped the same with the same 1.7. I believe the crimp over the bullet was creating a more consistent burn of the powder, what ever it was it worked. You'll want to seat them just deep enough to accept the roll crimp without deforming the top of the bullet. I stopped shooting matches about 10 years ago and sold the pair of Benelli's but I may have some of those old loads, if I can find them I'll snap a pic or two showing the crimp.

I’ve started testing the Bear Creek 148 HBWC.  I’ve shot them from a rest two handed using my S&W 52.  The results are in a separate thread started for the purpose.

Good evening,
Thank you for doing and posting your results.
I couldn't get any Bullseye powder a couple of years ago and had a jug of TiteWad sitting on the shelf. I ended up with consistent cycling and accuracy at 1.25GRNS with Lapua .3145 HBWC. I didn't test with a RR and I have one just didn't set it up. I find the Speer Plinkers worked best seated deeper and roll crimped, as was mentioned in another post. I have been hoarding/saving my last 1500 Lapua's for outdoors. I don't belive smaller diameter bullets make accurate ammo.

Twenty shot group fired at 50 yards via a mechanical fixture.

The ragged holes around the periphery are 22lr shots. I salvage Kruger targets from the small bore shooters. 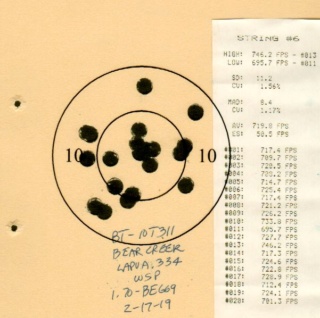 That is a very nice improvement, but is seems the Speer Plinker is pretty hard to beat? Thanks for posting.

Dave, how do your bumped Speers group compared to the standard ones in the New Pardini barrel?

Not sure what you mean by "New Pardini Barrel"?

If you refer to the muzzle choke, the bumped bullets shoot better than the out of the box Plinkers.

Remember, the Pardini HP NEW is 0.314" groove diameter until the very end of the barrel.

Not sure what you mean by "New Pardini Barrel"?

If you refer to the muzzle choke, the bumped bullets shoot better than the out of the box Plinkers.

Remember, the Pardini HP NEW is 0.314" groove diameter until the very end of the barrel.

Sorry for the confusion, I was referring to your previous post


The above barrel is a Douglas blank machined in the profile of a Pardini HP New. (Or, machined to replace the factory barrel.)

Dave, what I was trying to ask as if you have had a chance to test your bumped Speers in the aforementioned custom .311 Pardini barrel.  The results you posted using the standard Speers and the .larger Bear Creek bullets is interesting,  I was curious how the larger  bumped Speer compared to the std Speer in a .311 10t barrel.  I understand that the bumped bullets shoot better than the standard ones in the .314 barrel, which seems logical to me.

Sorry for the confusion.

Looking back through my archives, I did try ten rounds of 0.314" Bumped Speer bullets. 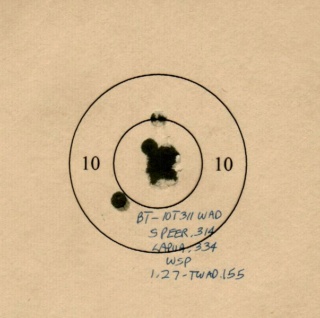 Thx Dave. I’m getting some very similar spec barrels in the near future,  so really nice to get a baseline to shoot for:)

Resurrecting this almost 2 year old thread with hopes of receiving some currency to the topic.  After realizing the almost complete abandonment of 32 HBWCs by manufacturers I'm on a path to swaging my own or at least puffing up the Speers as fc60 has done.  Currently I'm having fun attempting to machine my own swaging die/punches.

hello almost a year since this started
any additional info on the bear creek bullets
did the owner rebore his dies?
and has anyone purchased from Bear recently?
thanks

ermakevin wrote:hello almost a year since this started
any additional info on the bear creek bullets
did the owner rebore his dies?
and has anyone purchased from Bear recently?
thanks 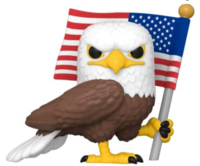