Hey all.  I volunteered to take over the scoring for our Winter league.  The former scorer was a non-shooter and was doing it as a favor.  She finally became burned out I think in part because of a tremendous amount of hand tallying she had to do.  I took the job with the agreement that I could work to simplify the scoring programs.

Seems to me there must be some programs out there that I can simply input the scores and will do the averaging that is fair to everyone.  Any suggestions?

hp246 wrote:averaging that is fair to everyone.

Good luck with that, no matter what system you choose people will argue about how "fair" it really is.

Chiming in because I remembered this thread:
https://www.bullseyeforum.net/t2605-scoring-handicap-system-for-small-local-clubs?highlight=handicap 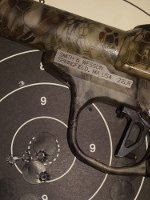