I started a project last month for a new bullseye box. Some of you are probably thinking "Oh lord, here we go again".

Hang in there guys. I wanted something small, airline safe-ish, simple to use, and easy to keep organized. I also wanted to keep the cost down. This last note is important because I want this idea to appeal to new shooters or parents with a youth shooter. Boxes are rarely made nowadays and they are expensive. If I could come up with an affordable option maybe it'll help some people. I think as members of any sport we should take advantage of an opportunity to help where we can.

The tried and proven method of a Pelican case turned bullseye box appealed to me. A pelican case is expensive to start with. But perhaps the dividers would be cheaper. I spoke with fellow shooter Joe Chang who had a box with dividers like I wanted to try. He had friends that had similar set ups too and at the Pheonix Mid Winter Championship match I was able to take a good look at them. This gave me the opportunity to form some ideas of what I wanted mine to look like and how I wanted it to function.

Turns out Pelican makes a divider kit called TrekPak. It's a system of removable dividers so the user can orient them how ever they wish. Pelican sells kits that fits their different size model cases. Unfortunately the kits are expensive too. You'd run well over $200 for a pelican and a divider kit before ever getting a spotting scope mount installed which is another $40 or $50. Not to mention the instal of some sort of lid controlling hinge/arm if you'd want one.

I decided to try a do-it-yourslef version. I found one online and it was similar to Joe Chang's box. Now I tried going cheap which isn't always best but I was trying to keep it low cost and affordable. I bought a case from academy sports - a Redfield brand case. It was small. Actually sort of too small for most euro guns but okay for the 1911 platform. So for someone else using bigger guns I recommend a bigger box. The redfield box was $50. The foam and black coro-plastic was about $20 from walmart (ordered online). The spotting scope mount was about $45 ish.. I can't remember. I've had it. The arm that helps keep the box lid in place so the spotter doesn't have too much movement in it was about $10 in parts form Home Depot and I had to make it myself. So in all I have close to $125 or so maybe $130 in components. Already the price is significantly cheaper than a traditional bullseye box design and cheaper than the Pelican. The rest was all a labor of love. Lots of measuring, cutting, gluing, throwing it away and starting over, etc. In the end it's not a very "clean" and seamless looking job. But it functions alright here in the house. This week I'll take it to the range for the first time and see how shooting along side it works.

It's rough but it's pretty much what I was looking for. Mine can hold three guns but because this can be built to the users preference, the amount of guns it can hold is up the user and the case used. Here are a couple pictures. I'm throwing this out here as an idea and hope it helps some people.

Now if I want to, I can attach my shoulder strap to the box via a couple of pad locks in place where their are two spots intended for locks to be used on the outside lid. Not ideal but another attachment option can be thought up of later. 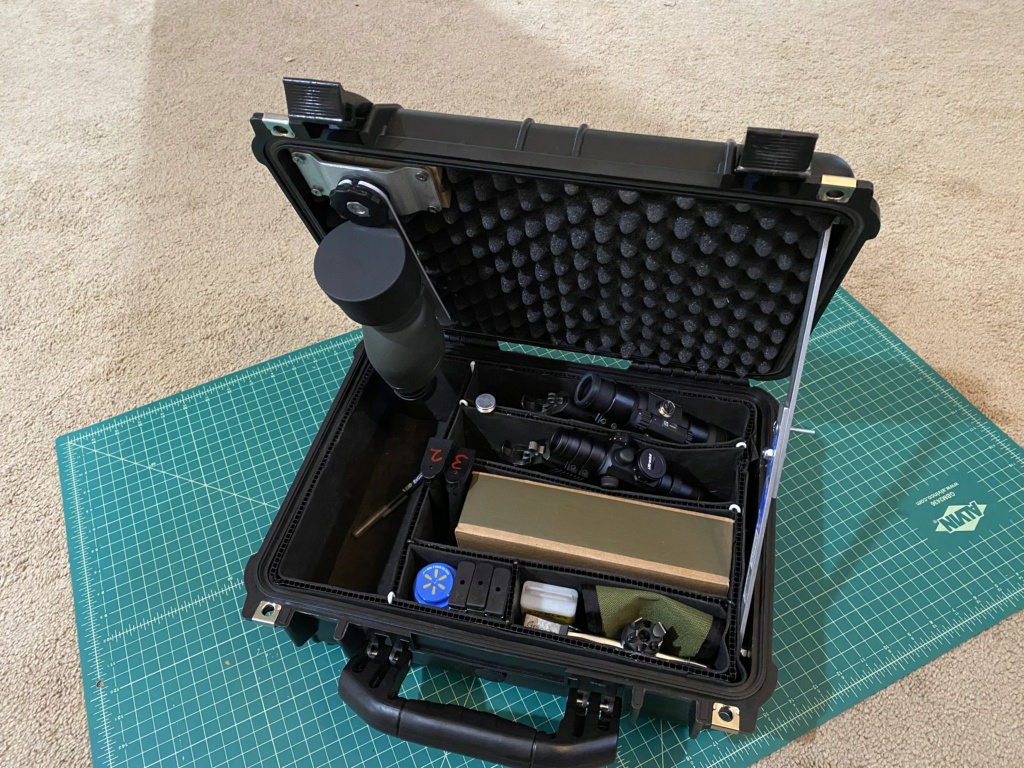 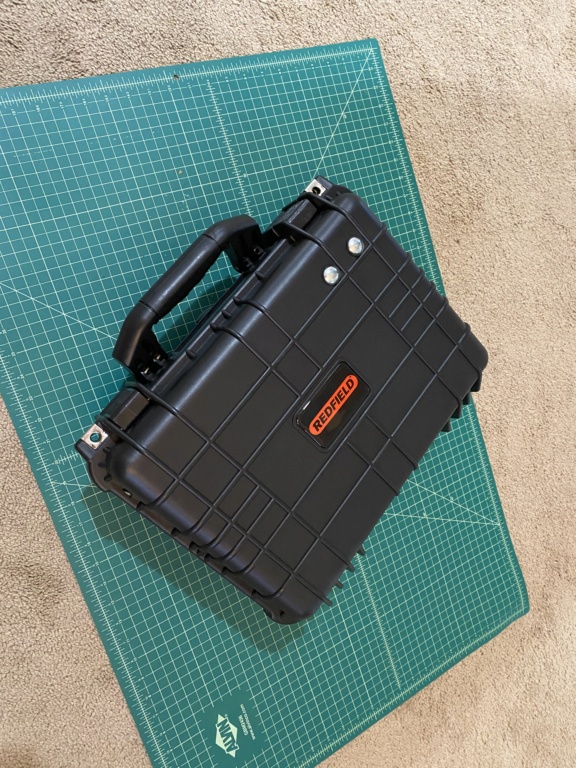 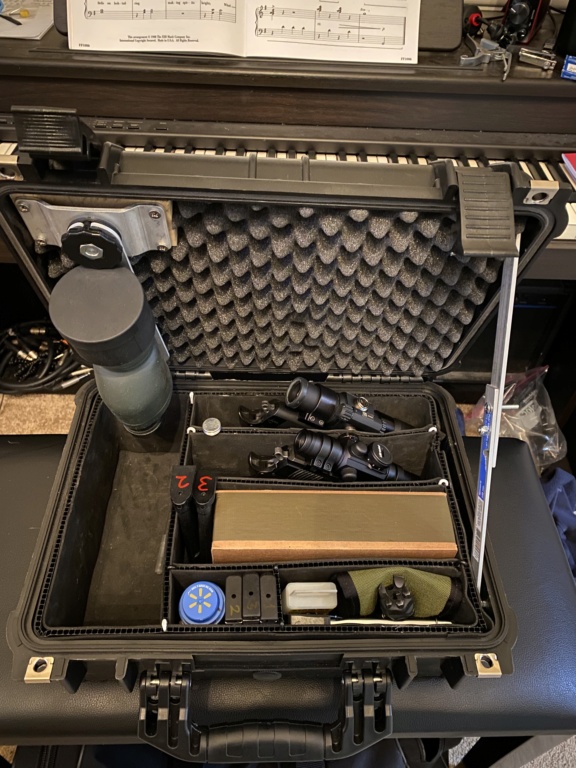 Jason,  nice job on that case.  I did something similar with a Harbor Freight apache 5800 case.  I glued the foam layers together with spray adhesive and sprayed it with plasti-dip, but it's not holding up. I'd like to try dividers like yours. 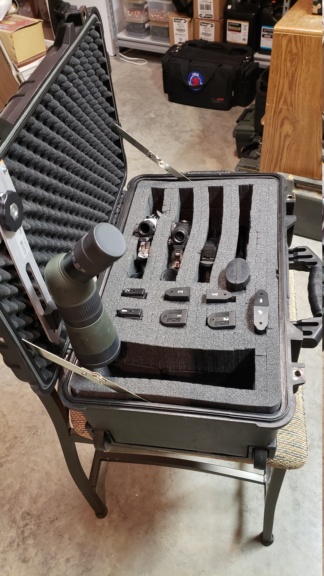 rreid I bought 4mm black coro-plastic and 4mm black foam, a roll of it, from Walmart. I glued foam to either side of a piece of coro-plastic to make the dividers and the outer wall. The dividers are held together with pieces of coat hanger wire that are bent into a U shape. Something in similar fashion to a bobby-pin. Nothing is glued in. The whole thing can be removed and the case can be used as normal again except for the holes I drilled for the spotting scope mount, and the lid support arm. While those two items are in use, I used rubber seals around the bolts to retain the case’s seal.

If you want a far superior foam, get some Kaizen foam.  I believe you can but it at Woodcraft and Rockler.  Kaizen is a rigid foam and is designed to be cut with a razor knife and the waste pealed out.  It's make in roughly 1/8" layers.  The common thicknesses are 1-1/8" and 2-1/4".  They come in 2' x 4' pieces.  There are videos in Youtube showing how to use it.  It was designed for french fitting tools in drawers.  It works very well in the Pelican type cases.  I cut pieces to size with table, chop and band saws and my CNC.  The band saw is great for reducing thickness of a piece.   Here's a link to Kaizen at Rockler:  Kaizen Foam

Also,Hyskore makes an aluminum diamond plate box.  I've just finishing up modifying one to accommodate my pistols with Dick Horton grips and Matchdot II red dots.  Ebay sells them, but the price is higher than Amazon.  Amazon has them for $130 with free shipping.  Not as cheap as the Harbor Freight boxes (I have 4), but more traditional.  I use a small tripod that sits on top of the box for my spotting scope.  I use a camera (a scope mounted Longshot brand) and a tablet, which allows me to just glance down without having to move around.  Here's a link to the Hyskore box:  Hyskore Competition Box

I may start a new thread with pics to discuss my project, rather than hijacking this thread.

Jason, you may want to look on Amazon or elsewhere for pad eyes, like you might use on a kayak.  You could bolt a couple onto the side of that case for your shoulder strap, freeing up your padlock holes.

Great looking “just headed out to the range for a bit” or league night case idea.

I did something similar with a used Pelican Storm im2500 case from eBay ($70, if I remember right).  Some 3/8" heavy carpet padding for base, 2" foam for the "inserts" and 1/4" plywood to make the upper shelf (lifts out with 55 cord "handles).  Right now I have it set up for my air pistol, but I can just make different inserts for the bullseye guns. 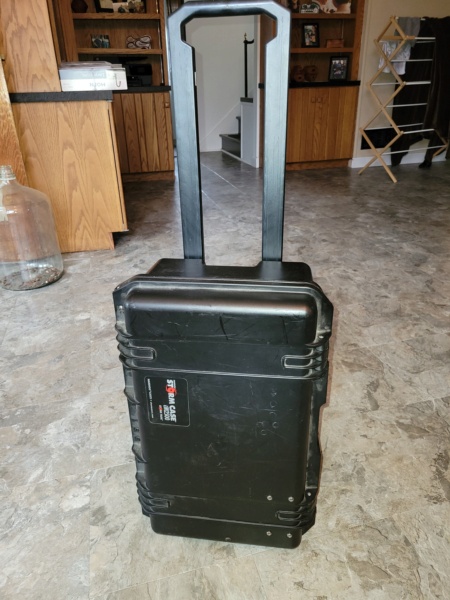 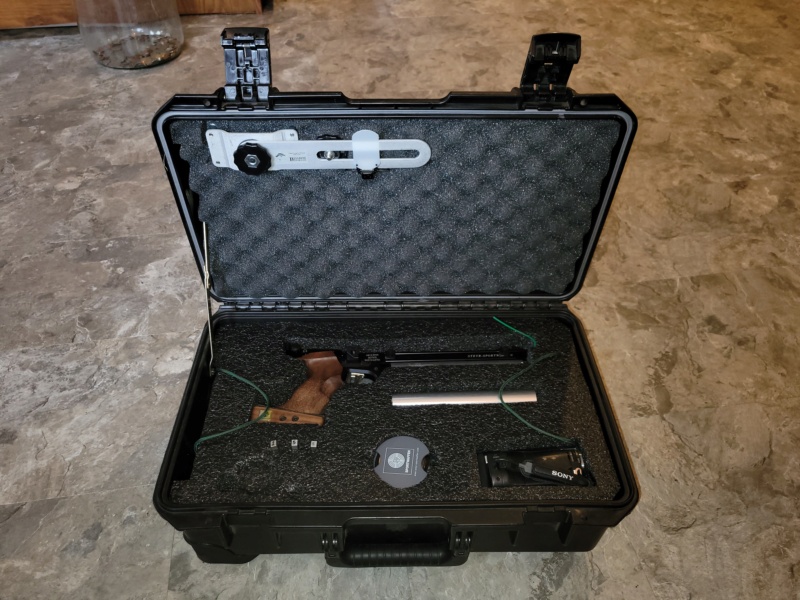 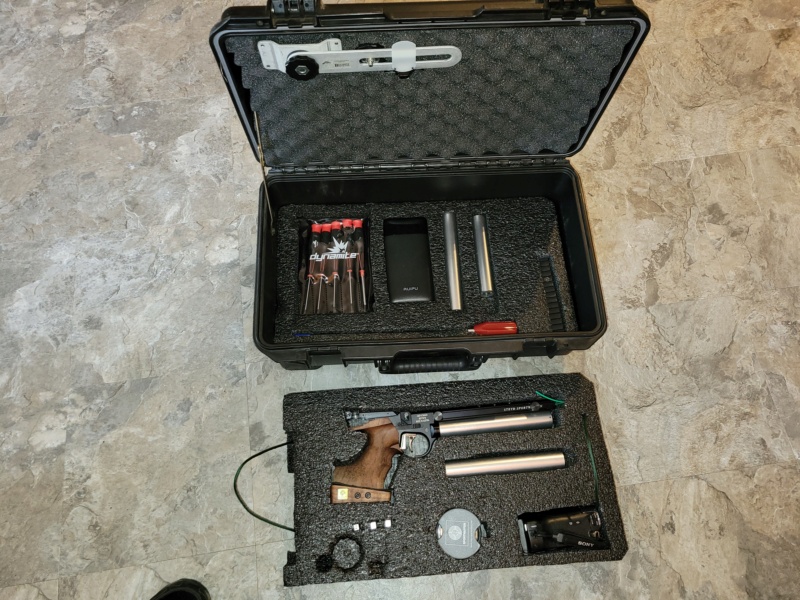 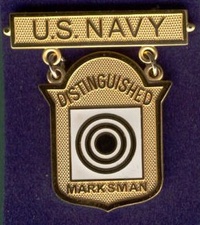 Perfect timing!!  I was just “gifted” a large Pelican style case and I wanted to turn it into a pistol box. My old Pachmar box doesn’t lock good enough anymore. I guess after 40+ years of twisting the key in the lock they aren’t holding tight enough, it pops open when I set it down a bit rough. We have to have locked cases plus trigger locks to travel to&fro….PITA factor!!

Very good examples to work off of…..Thank you.!!

Maybe a dumb question Jason but do you still shoot your personal guns instead of Army guns? I would have assumed something commercially available couldn't hang with what the shop is putting out. Good case design, I think I will copy that. I have flown lots of times with my wooden BE box and it has been a hassle, and really taken a toll on the thing.

SmokinNJokin wrote:Maybe a dumb question Jason but do you still shoot your personal guns instead of Army guns? I would have assumed something commercially available couldn't hang with what the shop is putting out. Good case design, I think I will copy that. I have flown lots of times with my wooden BE box and it has been a hassle, and really taken a toll on the thing.

I still have and maintain my own equipment. I shoot AMU equipment but sometimes when I’m on leave, or my work guns are in the shop, it’s a benefit to be able to break out my own equipment and still train.

What are you folks using for the hold open arms? 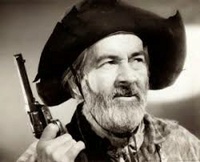 faraim wrote:What are you folks using for the hold open arms?

faraim wrote:What are you folks using for the hold open arms?